Where are they now? - Columban Centenary - Fr Tom Rouse 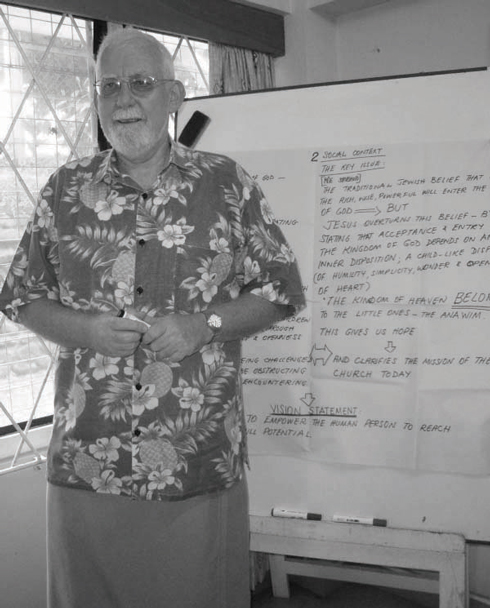 Edited from The Far East magazine, August 1989: During Fr Tom’s first twelve years in Fiji, he became fluent in Fijian and well versed in local customs. He was concerned for the poor, including workers and squatters, and the inequalities of the social system. Having studied social analysis in France, he spent a number of years helping trade unionists, rural and religious communities to understand why there was a gap between the rich and poor and to develop ways of overcoming these inequalities by standing up for the rights of the poor.

Since Fr Rouse had spoken out against the military coup of 1987, the Rabuka regime has been out to silence him. On the first anniversary of the 1987 coup, he took part in a prayer gathering in Suva’s Sukuna Park. There was a large crowd. The police eventually arrested 18 people. These included Columban Frs Tom Rouse, John McEvoy and Paul Tierney. The group were charged with unlawful assembly. They were also subjected to gassing in the police station. After only one night, they were released. Their trial lasted for about nine months. On the final day of the trial, they were all discharged without conviction.

On April 21, 1989, the government refused to renew his work permit. To the distress of his parishioners of Raiwaqa parish, Fr Tom was forced to leave the country four days later!  There was no legal process of appeal that the parishioners or their bishop could adopt to appeal against his deportation.

On the day of his expulsion, a local journalist wrote an article in The Fiji Times, mourning the loss of a “true Christian”. Many people came to the airports at Nausori and Nadi to farewell Fr Tom.

In 2004, Fr Tom returned to work in Fiji, first as Assistant Parish Priest in the parish at Ba, then for two three-year terms as Columban Regional Director for Fiji, firstly in 2007 and then in 2010.