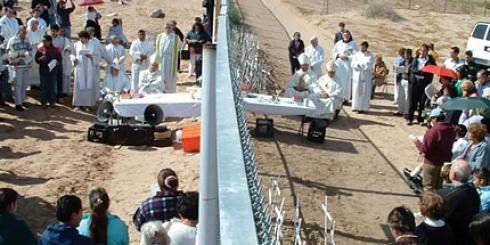 In both Ciudad Juarez, Mexico, and El Paso, Texas, United States, cities separated by only a fence, Columban Fathers and Lay Missionaries have served communities on the border for over 20 years, providing witness to the severe trauma and violence they have faced.

In El Paso, Texas, Columbans run the Columban Mission Centre where they host groups from across the country for a border immersion experience. During these trips, the Centre facilitates groups’ contact with organisations and institutions related to U.S.-Mexico border issues including poverty, migration, and human rights.

On the other side of the fence, in Ciudad Juarez, Mexico, Columban Fr Kevin Mullins runs a vibrant and thriving parish. The parish, which rests in a poor suburb on the northwest edge of Juarez called Rancho Anapra, has become a place of refuge for parishioners in a city well known for its violence.

This regional mission work plays a central role in the Columban position on migration, which emphasizes the spirit of welcome, as is present in all the work Columban Missionaries do around the world. Pope Francis’ Mass, during his 2016 visit to the U.S.-Mexico border, also drew attention to the plight of migrants and refugees and the reality of life on the border. Even more, his Mass reminded us of our call, as people of faith, to welcome the newcomer.

In 2014, Channel 7 News interviewed Columban Fr Kevin Mullins on his work in Juarez - one of the most dangerous cities in the world: