The gift of deafness 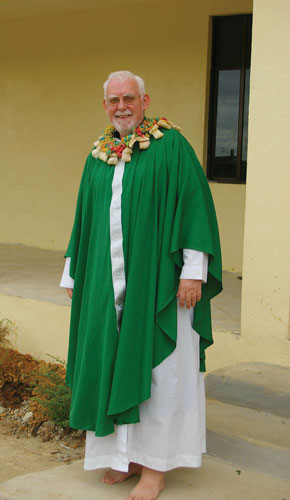 It was to the credit of the Columbans that I was accepted as a candidate for priesthood. That was back in 1969 when I was completing Form Seven in high school at St John’s College, Hastings, New Zealand.

I was accepted despite the fact that I was not only deaf but I also suffered a serious speech impediment which was a consequence of my hearing disability. My deafness was more peculiar rather than pronounced. I cannot hear high-pitched sounds. As a result, I cannot hear many of the consonants in my own “native” English language.

Nevertheless I was admitted into the seminary at St Columban’s College, North Turramurra, Sydney, Australia. But, by the end of my first year, it was evident that my speech impediment would be a serious handicap if I wished to progress towards ordained ministry since one of the principal tasks of an ordained priest is to preach. How could I effectively preach if people could not understand what I was saying?

So I was advised to seek the help of a speech therapist at Royal North Shore Hospital in Sydney. There I was fortunate to receive the help of a young female therapist who gave me a set of charts which indicated where I should place my tongue, lips and teeth in the pronunciation of each of the consonants.

So I devoted a year to this program of intense therapy. It meant spending roughly an hour each morning and an hour in the afternoon standing in front of the mirror in my room and practicing the different consonants. I gradually got the impression that this simple habit of constant practice in the pronunciation of the consonants, resulted in a significant improvement in my speech. It also helped to boost my confidence in public speaking.

However, a couple of years later, I became aware that members of the teaching staff at St Columban’s were also concerned about my ability to learn another language which is an essential prerequisite for anyone seeking to take up work as a foreign missionary.

So I was advised that I would probably be better off becoming a diocesan priest and working in my own country or an English-speaking environment because I would find it difficult to learn another language. After some discernment, I informed the rector that I wished to continue on in seminary formation to become a Columban missionary priest.

Again, it was to the remarkable credit of the Columbans and the staff of St Columban’s seminary that I was allowed to continue on.

In my ordination year, Columban Fr Dave Arms, a linguist and missionary priest working in Fiji, came to see me at St Columban’s seminary to assess what language or languages I would be more likely able to learn given my hearing disability.

In his judgment, I could more easily learn Fijian because many of the sounds in that language are low-pitched and well within my hearing range.

So, after ordination and the completion of my seminary formation program, I went to Fiji in January 1977 and commenced language studies the following month. What I learnt, apart from a new language, was that deafness would prove to be a great gift in learning another language.

I came to realize that one of the greatest difficulties for any adult in learning a new language is to be like a little child again as you struggle to express new sounds and to put sentences together so as to make yourself understood. This would also include, what is for many, the humiliating experience of people laughing at you because what you said sounded funny and awkward.

For me, this was an experience I had grown to live and cope with throughout most of my early life because of my speech impediment. When people laughed at what I said, they would be informed that I was deaf. This would mean that they would get embarrassed and say, “I am sorry. I did not know.”

And I had learnt to turn such potentially embarrassing situations into very humorous ones by means of a funny comment and by assuring these people that no offence was taken and that there is something funny, awkward or unusual about each one of us. As St Paul once said, “It is when I am weak, it is then that I am strong.”

As I was learning Fijian, I remember the delightful experience of watching people laugh as I struggled to put words and sentences together. According to indigenous Fijians, shame is a terrible burden to inflict upon anyone. They therefore have the traditional practice of placing their hands over their mouths when they are laughing, particularly when they are laughing at what someone is saying or doing.

But I would have no difficulty in simply saying, “Oh no, what have I just said? What should I say?” My hosts would giggle and gently correct me. And, unlike many of my fellow foreign missionaries, I found the whole experience a source of great enjoyment.

So I became a reasonably fluent speaker in the major indigenous Fijian language.

I believe that God intended me to be deaf because God was calling me to be a missionary. And it was to the great credit of my Columban vocations director and the members of the staff at St Columban’s seminary that I was allowed to pursue what I believe was my God-given vocation. And the rest has been a wonderful and oftentimes fun-filled experience.