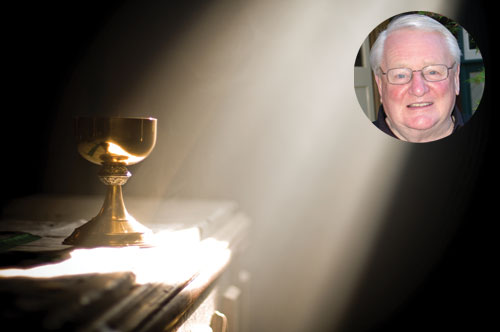 The Far East magazine congratulates Columban Father Michael Gormly as he prepares to celebrate the 50th anniversary of his ordination to the priesthood. He was ordained priest on the 29th of June, 1965, in the church of St Mary of the Angels, Wellington, New Zealand, by Archbishop McKeefry, the Archbishop of Wellington.

Fr Michael is the son of Val and Mary Gormly, of Hataitai, Wellington, New Zealand. He had two sisters, one who married and the other became a Sister of Mercy, and is now deceased.

During his 50 years of ministry as a missionary priest, Fr Michael has served the Lord and His people faithfully in many various capacities. After ordination, he was appointed to Korea where he served for 17 years as parish priest and Columban Superior in several dioceses.

Between 1984 and 1990, Fr Michael was reappointed back to the Columban Region of Australia and New Zealand, working in a variety of areas. After a period of study in 1983-84 in the United Stated, he worked in Mission Education in New Zealand and as a consultant to the National Mission Council in New Zealand.

In 1986, Fr Michael was appointed the Regional Director for the Columbans in Australia and New Zealand. Upon completing his term as Regional Director in 1990, he was appointed to Pakistan where he served until 1993. After Pakistan, Fr Michael returned to work in Mission Education in New Zealand. Between 1995 and 2000, he served as the Columban Coordinator for Justice Peace and the Integrity of Creation (JPIC), based at the Columban Mission Institute in Sydney as the Convener for the Peace, Ecology and Justice Centre.

Congratulations to Fr Michael on these years of priestly ministry well spent in the service of the Lord and His people.

Donate to support the work of St Columbans Mission Society