John is a convert to Catholicism; a Canadian married to a Chinese woman 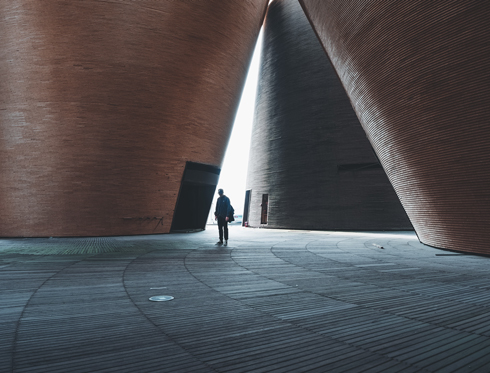 The first question that I recall in my faith journey was probably when I was 12 years old. I grew up in the Presbyterian Church and was taught the doctrine of “once saved, always saved”. That means that once a person is baptized, that person is saved and there is nothing further that person has to do or can do to get to heaven. We are saved solely by a gift from God. This is different from the Catholic teaching that after baptism we are regenerated by God’s grace and have to co-operate with God’s grace.

After being quite involved in the Presbyterian Church for a long time I drifted away from church. I didn't decide to suddenly stop going to church. It happened slowly. I started to become too busy to make Sunday services. Then I just stopped going during the school year. Then I stopped going when I came home at school breaks.

There was, ironically, a small period during my last year of school when I accompanied friends to a Catholic Church, and remember feeling peaceful there, but other than that I had little to no contact with a Church.

It was a wandering time for me, not just with my faith. I wandered physically too. In August 2003, I finished a contract with a media company I was working for in Toronto and made the move to Shanghai, China.  There, I had a number of jobs and each one was a step up. I was making more money. I felt successful. Along the way, I met a wonderful girl who I would later marry. I did go to a Protestant Church in China for about three months. This was after living in China for about four years. But I was turned off by the mega churches and the homogenized protestant Christianity.

Instead, I replaced it with culture. Movies and books became my religion. They allowed me to see outside myself and they were something that I could share with friends. I tended towards movies that were deep and about the human condition. I'd say I was into philosophy. Looking back, it's clear I was searching for faith, like many times before, but I just couldn't put my finger on it.

At the start of 2010, the relationship with the woman I would later marry started to get serious. While I wasn't living a life of depravity, I knew that I needed to change something in my life. I didn't really know what but I started thinking about the Church - and it was the Catholic Church. After living in China for seven years, I knew I needed to do something to change. I've always believed that marriage is forever. And I knew that I wouldn't be able to live a proper married life on my own. I needed God's help.

Now where was I going to get that help? I didn't start praying so much, but I started paying attention to things of faith more. I wasn't ready to return to Church. I remember the day after my bachelor party in January 2011, I wandered around the outside of Shanghai's St. Ignatius Cathedral. I made sure that I went after Mass so that it was quiet. I felt at peace there, but I wasn't ready to go inside.

I married my wife, Betty, on Valentine's Day 2011. God and faith didn't break through that day but were going to very soon afterwards.

It was February of 2011 and a Saturday, I had just come back from Taiwan the night before and had gone shopping with Betty. On the way back we passed by the Cathedral and I was compelled to go inside. I can't say why but I had to go in. We went inside and spent about five minutes watching a Mass. I don't want to say "attending" because we were strictly observers. We left soon afterwards. But I went back the next day for Mass and the Sunday after that. After that second Sunday I enrolled in RCIA.

I can't say why it took only two weeks for me to enroll, but looking at what I wrote above I can say it’s because I found my home. I spent a year and a half in RCIA. Unlike other converts that I have spoken to, I didn't really have a specific objection against the Catholic faith, such as Mary, the Eucharist or praying to saints. It all just seemed to come together. I can only say that, based on what I had gone through during my own faith journey earlier on, I knew what wasn't true. So what was in the Catholic Church had to be true.

And if I didn't understand something, I asked and I studied and I prayed. By doing that I was ready to accept everything the Catholic Church taught, and I entered the Church at Easter 2012. I've never regretted that decision. And I see myself and have been told by others that it's made me a better person. That proves to me it's a decision I will never regret.