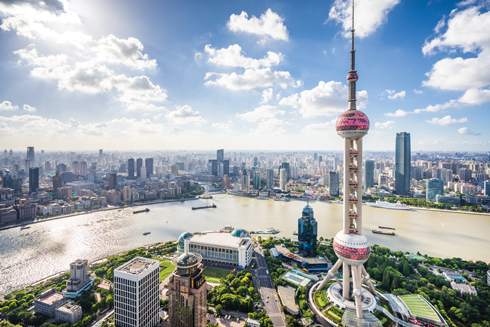 I am French and come from a family that identifies as Catholic culturally, but my family members have little to no faith in God. I was baptized as a baby and I went to catechism class as a child because it was considered good education and moral teachings, but I cannot remember attending a single Sunday Mass, apart from a few weddings and my First Communion.

I come from the Christian tradition and learned about Jesus Christ as a child, but I was unable to love what I did not understand, let alone have faith in Him. So I put religion up on a shelf and left it there. I cannot say that I was missing it – you cannot miss what you never had, and most of my generation had a similar story: raised with Christian values, but we had no idea what having faith meant or felt like.

In 2012, I moved to Shanghai for work and I met my now-husband Alex. He is Italian and a Christian Catholic, and right from the beginning the way he lived his faith threw me off balance. For the first few years we were together, we had lots of conversations about religion, which often turned to arguments. I would challenge him, and he would challenge me; soon it became clear that we actually agreed on everything – the Christian values, the history, the peace of mind reached in prayer. But there was some fierce resistance on my side. There was doubt. For me, all of this was based on the condition “If God exists” and I was bumping into a wall, unable to go any further.

Watching Alex and his unconditional love for Jesus Christ made me go through a wide range of emotions, from admiration, to envy, to sadness. I felt like I was missing out on something. I was so conflicted internally. I started praying by myself, or at least tried to, shyly and secretly, but I felt like a hypocrite. I started to accompany Alex to Church on Sundays, occasionally at first, then more regularly.

As you understand by now, my coming back to Church was certainly not a fluid and easy path, but it was a natural one. Two things happened.

First, I never imagined Sunday Mass would give me so much energy. The international community at Saint Peter’s Church in Shanghai straight away welcomed me as a part of the family. During Mass, hymns were what initially got under my skin. I would cry uncontrollably because I couldn’t cope with how they made me feel. I was so moved every time and amazed by the community of faithful, coming from dozens of different countries and backgrounds, yet all united in prayer and love for God. It was beautiful.

I started to let myself be taken and lifted up, I felt in communion with the community.

The second milestone on my faith journey was my encounter with Columban Fr Warren Kinne, who was the Priest in Shanghai at the time. I am so grateful that he always made time for a one-to-one talk with me in times of questions and doubts.

Alex had recently proposed to me. I knew what the sacrament of marriage represented for him in regards to his Christian life and I wanted to be worthy of it and to embark with him on this adventure in a similar state of mind.

I shared these issues with Fr Warren as we walked around a park in Shanghai; I remember the contrast between my agitation and his calm. He told me that faith was a personal journey and that I had to make my own rather than follow or copy someone else’s. Perhaps God was sending me signs every day, but my heart and eyes were closed with skepticism and I didn’t see them. I had to stop resisting.

As simple as it may sound to you, this had a tsunami effect on me. That day, in that park, on that bench, my barriers went down. And looking back, I now know that this was the turning point when I finally accepted my faith and let it flow within me.

Being married in front of God and my family is the strongest commitment I have ever made. Alex and I feel so close as husband and wife, and I cherish our special moments. We adopted a habit of praying together, asking for God’s blessings, and giving thanks, night after night. I think my personality is evolving towards being less resentful and more selfless, although this is a lifelong learning curve.

This is my personal faith journey; for me God is love and hope. He is the Father who humbles and unites us. I know deep inside that my faith is about to start a new chapter, as I am about to no longer be a daughter, but to become a parent myself.