Yumei is Singaporean and her husband and their daughter have now moved home from Shanghai. 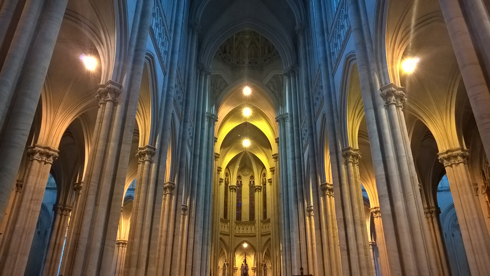 I am humbled and grateful for the opportunity to share my story.  I would like to start from the point where my husband was offered a posting overseas due to his job in a multi-national advertising agency.

In 2012 our family moved to Shanghai, with heavy hearts we had to bid farewell to the good friends we made in Beijing, but a new chapter of our lives unfolded.  We were able to adjust easily, after all, it was moving from one Chinese city to another. And we quickly established a routine for the family:  work, school, church. Every Sunday we headed into the city to St Peter’s church where we attended Mass, again there were opportunities open, and I volunteered as a catechist for First Holy Communion and continued to serve as a communion minister.

One Sunday after Mass, there was an announcement for an Emmaus Retreat held in Jin Ze, a small rural countryside town about an hour’s drive outside of Shanghai.  I signed up for the Emmaus retreat, unsure of what would happen and in a couple of months, I found myself on a bus with a bunch of women on our way to Jin Ze. The retreat centre was in a tranquil setting nestled amidst lush greenery with dogs, chickens and even a goat or two on the premises.  There were 30 of us on the retreat and for some, the experience and effects of those three days would live on until today.

The retreat was based on the Gospel of Luke 24:13-35, where two disciples were making their way to a village called Emmaus seven miles from Jerusalem when they were approached by a stranger.  Along the way, the stranger conversed and interpreted every passage of scripture to them.  Their eyes were restrained from recognising him as Jesus. When they arrived at their destination, they invited him to stay. At supper, when he broke and blessed the bread, their eyes were opened, and they recognised Jesus, after that he vanished from their sight.  They said to one another, “Were not our hearts burning inside us?”

I had come to the retreat as a reprieve from the hustle and bustle with no expectations.  Little did I know that for the three days, I would encounter Jesus in a profound way.  I was like the two men on their road to Emmaus; my eyes were restrained from recognising Jesus in my midst.

In one of the topics of the retreat, we were asked to reflect “Who are we? What masks do we wear?”  Many scenes flashed before my eyes, and I saw that I had on several masks; as a wife, mother, daughter, sister even a friend. These masks were worn to almost form an external barrier to protect me emotionally.  My rationalisation was that they were necessary, essential even, in order not to get hurt, disappointed and rejected.  I felt certain that the less one loved, the less one would be hurt.  I looked back and realised I was carrying in me a lot of emotional baggage that was the result of a failed relationship in the past.  I had placed all my hope and trust in a person who turned out to be the very one who would betray my trust.

I went away that night confused and heavy-hearted.  How could I reconcile my beliefs that self-preservation was not more important than learning to love and trust another whole-heartedly again?  I did not know what to make of my mixed feelings.  Why was I now drawn to sadly review myself in the light of my masks?

For some quiet time to think, I went into my room.  On top of the bed lay a sheet of paper (it was a Palanca letter for the night).  I haphazardly glanced at it and the words “Two disciples” caught my eye.  My room companion and I discussed what it meant; how we’d manage, why we trusted in the first place; at one point joy in being lifted up, he had let us down.  Wondering how somebody as strong as he could have this weakness…”

I made a resolution to change; I asked God to grant me the strength to love unconditionally and unselfishly.  To love my husband, my children, my parents, my friends, strangers even.  To take the risk and to give without counting the cost.

We moved back to Singapore in 2015; I now serve passionately and actively in prison ministry where I can be a vessel to bring friendship and hope to those who are in despair and are in need of the Good News of Jesus.

Even though my Emmaus retreat has ended, my heart continues to burn inside of me as Jesus walks with me on my Road to Emmaus.