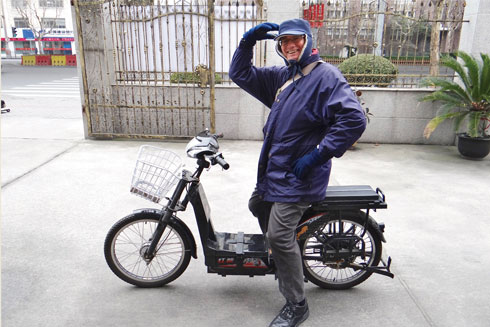 In Shanghai, I was blessed with many opportunities to serve others and gradually to find a useful place in the community that was much appreciated by others. In fact, all this was more beneficial to me in comparison to the wee good that took place through my cooperation that others in promoting the good and alleviating distress. People I found there were most appreciative and kind and understanding. There were ever supportive people present for me, and while there is a deep streak of independence in me, in the end, I, like others, work best in an interdependent context. I have rarely been dependent, and I tend to be overly independent, but interdependence is what works best, and people drew me out of myself through their own goodness and good example. God doggedly accompanied me on my faith journey in Shanghai.

My life there really revolved around three poles: the university where I taught for ten years until age and perhaps other factors interrupted the continuance; the church and related service especially in the latter years of my stay when I was more called upon; and in my own cooperation with others in the work with migrant workers and the setting up of You Dao Foundation. It is difficult to gauge one’s own contribution but certainly, without the other people who had gifts that I did not have and who contributed unstintingly to the work, nothing would have happened.

I think of the many unforeseen and blessed moments that I have had with others. For example, there were the long Monday evenings with Bud Pratt, and how for over two years we laboured, line by line, through Dante’s Divine Comedy.  Later we were ably joined by a Greek scholar, David Symington. Grappling with Dante’s medieval text with the help of Bud and David was an undoubted blessing. Not only was it an insight into marvellous literature in which was integrated Greek mythology, contemporary science, Christian faith and the vagaries of the history of the time, but more importantly, in a complex parable, it showed that I have to discover my own “deadly sin” of the seven that Dante considered. I will let the reader guess what sin and propensity is mine, but like everyone I needed to face the simple issues of heaven, hell and purgatory. We are destined for paradise: union with God, through purgation and hard work as well as grace. But perdition is always a possibility: to follow one's wayward instinct and to plunge into a hell of one’s own making.

There were many encounters with God through others in various groups such as Emmaus and bible study, at Mass, at the Wednesday morning men’s group. A book could well be written about all this.

At Mass recently I was moved by a passage from Ephesian chapter three and then realized in 1970 I had chosen a part of the text for inclusion on my ordination card: that Christ may dwell in your hearts through faith….so that you may be filled with all the fullness of God. Now to him who is able to accomplish far more than all we ask or imagine, by the power at work within us.. This is a powerful piece that sums up what I want from my life, and that was written on my ordination card. It is largely unfulfilled with quantum leaps yet to be made.

My belief is that there are “rumours of angels” all around us if we have the eyes to see. We can easily miss the moments when grace breaks through. Yesterday, on my way home here in Rome on the number 19 tram, I saw God in the face of the wee Indian child in the seat in front of me. She was humming away and singing at the top of her voice, as happy as the day is long and oblivious of everyone. But then she started drumming messages to me through the plastic seat. I drummed back communicating with our own type of Morse Code. We had a grand time. As Thomas Merton well said: “We were created to be the manifestation of divine beauty”, and she certainly was. Earlier in the day, on the tram to Piazza Bolivia, a lad of about 15 with special needs and drooling at the mouth hugged a young women in the tram. Obviously, they didn’t know each other. The disabled lad was with his older brother who solicitously watched on. The girl was very understanding and accommodating and let him hug her. I must say the disabled lad had good taste. Let us be observant, embrace the day, and respond to grace.

I am so grateful for my time in Shanghai and for the many people who were a part of my journey in that place. May God bless all of us and continue to travel with us on the various paths we have now taken. We can still be present to one another through networking and through prayer. I still need your support and rejoice in having journeyed with you.