Feast Day - 24 May Our Lady Mary Help of Christians 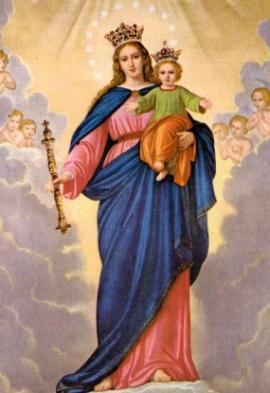 The Feast Day of Our Lady Mary Help of Christians has been celebrated in Australia since 1844 but the history to this day, dates back to the start of the 1800's at a time when Napoleon Bonaparte had gaoled Pius VI (who also died in gaol). And later, when Pope Pius VII was elected he too was gaoled by Bonaparte, who kept him prisoner at Fontainebleau.

The military eventually forced Bonaparte to release the Pope and on 24 May, 1814 Pius VII returned in triumph to Rome.

Twelve months later the Pope decreed that the Feast of Our Lady Mary Help of Christians be kept on 24 May.

The infant church in Australia had a special reason for turning to Mary. No priests were sent to the colony in its early days and Mass was not allowed except for one brief year until 1820. It was largely the Rosary in those early days that kept the faith alive.

The Australian Catholic community remained faithful to Mary and Australia was the first nation to choose her under the title, 'Mary Help of Christians' as principle Patroness.

Australia also became the first country to have a cathedral dedicated in Our Lady, Mary's name. St Mary's Cathedral in Sydney was dedicated in her honour by the Irish pioneer priest, Fr John Therry who arrived in Sydney in 1820.