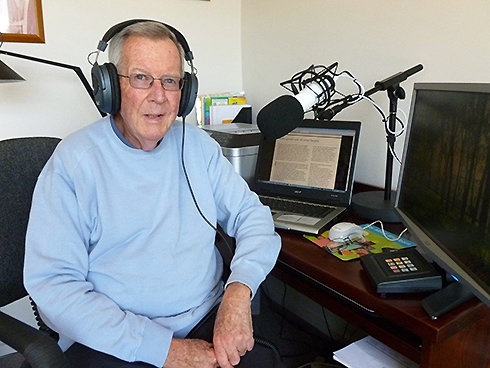 The smooth and velvety voice of Villa Maria volunteer, John Doherty has been enjoyed by hundreds of people for more than six years. Each week from his Adelaide home, John records text from Catholic magazines including The Far East, Sunday Mass readings and newsletters for vision impaired people supported by Villa Maria.

Up until recently, John - along with two other volunteer readers - were using out of date audio tape cassettes. He is now delighted with the introduction of DAISY (Digital Accessible Information System) which enables people to access the texts as digital audio files with better sound quality, resume playback options and storage of books on one CD, rather than numerous tapes.

"The tapes and DAISY are as different as chalk and cheese. The DAISY quality is better and editing is much easier," John said. "I am hoping we will be able to reach even more people."

Supporting people with vision impairment is a topic close to Villa Maria’s heart. The organisation was founded as the Catholic Braille Writers' Association in 1907 by Louisa Fawkner a partially blind early colonist of Melbourne who worked tirelessly to have Catholic literature transcribed into Braille.

Since that time, Villa Maria has evolved from exclusively supporting people with vision impairment to becoming one of Victoria’s largest and oldest not-for-profit providers of disability, education and senior services.

Villa Maria’s Pastoral Care Coordinator, Sr. Mary O’Shannessy said "thank you" to a generous donor for helping make the purchase of technology (necessary for the cassette to DAISY changeover) a hopeful reality.

"This system is widely used across the world and it has many advantages. We are working very closely with Christian Blind Mission and Vision Australia to provide this unique service."

Villa Maria is the only organisation in Victoria to offer Catholic material to people with vision impairments. Each week, Villa Maria volunteers ensure that they stay connected to community, servicing vision impaired peoples via telephone and on a monthly basis Catholic audio tapes are distributed across Australia, including Nuns and Brothers who are vision impaired.

John, who has retired from a career in commercial radio and television, was recently excited to record a Person Centred Plan (PCP) for Villa Maria Shared Supported Accommodation resident Cherral, who is vision impaired. The PCP included Cherral’s hopes and goals for the next 12 months, guided by the Villa Maria Lifestyle Services team. When the team learned Cherral had many talking books at home, they decided that a PCP audio recording would be ideal for sharing information in a way which was meaningful to her.

John said, "I hope the people who receive the recordings get a great deal of enjoyment out of them."

St Columbans Mission Society would like to thank Villa Maria for their articles and John Doherty for his dedication and work.