In recent years we have become more and more aware of how vulnerable our oceans are to climate change. The Arctic Ocean is capped by frozen seawater, called sea ice. This melts during the Northern Hemisphere’s spring and summer months. It normally reaches its minimum extent in mid-to-late September before refreezing again. Since 1978 satellites have monitored the melting and freezing of sea ice. They have detected an overall decline in Arctic sea ice coverage by almost 12 percent per decade. This means that the Arctic sea will be ice free by 2030 or in 16 years. The reason is that the temperature in the Arctic has increased at twice the rate of the rest of the world and could possible increase by another 8 degrees celsius by 2100.

Many species especially Polar bears will be adversely affected by the dwindling ice cover. There is also the possibility that the effect will weaken or completely shut down the global ocean circulation, because as ice forms it expels the salt which increases the density of the surrounding water and as consequence plays a crucial role in global ocean circulation.  The shut down of the Gulf Stream would have a huge impact on the climate of western and northern Europe, especially in Ireland and Britain. 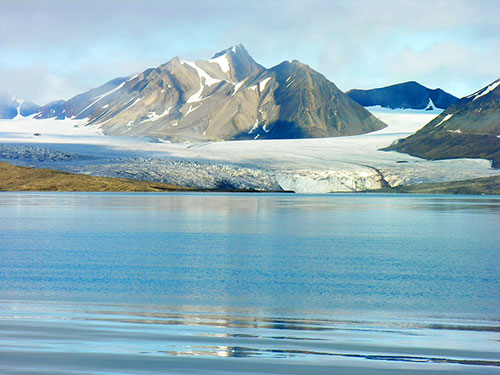 The mass of the Greenland ice sheet has been rapidly declining in recent years due mainly to surface melting and iceberg calving. Research based on data from NASA’s twin Gravity Recovery and Climate Experiment (GRACE) satellites indicates that between 2003 and 2013 Greenland shed approximately 280 gigatons of ice per year, causing global sea level to rise by 0.8 millimetres per year. In general, the interior of Greenland there has not been much change, but in the southern coastal area up to three metres of ice mass has been lost over a period of 10 years during which these observations took place. The largest loss of up to 30 centimetres per year occurred over southern Greenland.

NASA’s twin Gravity Recovery and Climate Experiment (GRACE) has also produced quite worrying data from the Antarctic. In the ten year period between 2003 and 2013 Antarctic lost 90 gigatons of ice per year. This caused global sea-levels to rise by 0.25 millimetres per year. Glaciers are also on the move in Antarctica. The highly dynamic Pine Island Glacier which is located on the Western Antarctic sheen is in fact a large ice stream. In other words it is moving faster than the surrounding ice. Satellite data shows that the speed of this glacier has increased dramatically from the late 1990s until the present. On October 26th 2011, NASA’s Operation Ice Bridge campaign made the first detailed measurements of a major iceberg calving event which took place on the Pine Island Glacier. The depth of the canyon which was created estimated between 50 and 60 metres and an average of 73 metres wide, which made it possible to fly through the ice canyon. If these changes continue or increase the rise in sea-levels will exceed the projected one metre rise by the end of this century. This will have enormous consequences for all coastal cities which will be very vulnerable to storm surge and serious flooding.

(All data referenced in this article is taken from the U.S. Centre 2014 Hyperwall Science Stories, which was distributed during a seminar at the U.S. Pavilion at Lima on December 3rd 2014)

Read another article on COP 20: Day One: Challenges faced at COP 20 or Day Two: Should we be aiming at 1.5 degrees?