Columban Missionaries have been thanked for their dedication and missionary work in the Philippines by Cardinal Luis Antonio Tagle, Archbishop of Manila. A special mass was held on March 14th at the Columban Manila House, with Columban International Leadership present. 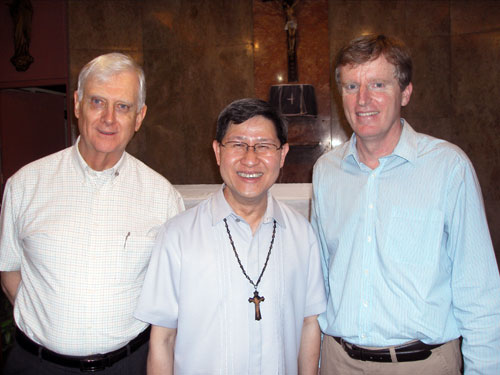 Cardinal Tagle spoke and gave thanks, "Thanks for the Columban Missionaries who have allowed themselves to be vessels of God’s love ... you have touched hearts here and elsewhere and conveyed the mystery of God’s love ... helping myself and others understand what Christian leadership is all about." The Archbishop of Manila was thankful that even he, as a young man, had received support and guidance from Columban Missionaries to help develop a sense of mission, concern for social justice and care for youth.

The mass was concelebrated with Columban Fr Kevin O’Neill, the Australian Superior General of the Columbans who is based in Hong Kong, and Fr Patrick O’Donoghue, the Irish Director of the Columbans in the Philippines. At the conclusion Fr O’Neill warmly thanked the Cardinal for coming, "It is wonderful to have such a young and vibrant cardinal in the church," he said. He then highlighted that the Columbans, with more than 400 missionaries in 13 countries, continue "to discern how the Spirit is guiding us to engage with the contemporary world today".

Columbans have been present in the Philippines since 1929 and 8 Columban Missionaries have been martyred over that period. After the mass, a smiling and relaxed Cardinal Tagle – one of the world’s youngest cardinals at 56 years – circulated to greet the Columban priests, sisters, lay missionaries and lay co-workers who were present.

Pope Francis recently appointed Cardinal Tagle, one of three co-presidents for the Synod on the Family to be held this Autumn. The Columban meeting reaffirmed the commitment of Columban priests working in partnership with Columban lay missionaries, sisters and lay co-workers, and in developing opportunities for lay people to engage in short term mission. The Columban commitment to work in Justice, Peace and the Integrity of Creation, alongside Inter-Religious Dialogue was  also reaffirmed. Columban Missionaries will continue to raise awareness and undertake advocacy for the rights of migrants and the ongoing threat of climate change, along with the related issues of water and mining. As well, Columban engagement with China and Myanmar will continue to develop into the future.

Enormous appreciation was expressed for all Columban benefactors in Britain, Ireland, United States, Australia and New Zealand, many of whom are readers of the The Far East Columban mission magazine, one of the Catholic Church’s largest mission publications.

Other highlights during the meeting included words on new engagements with youth and social media, including Columban Facebook and Twitter communications.

Ellen Teague is a member of the Columban JPIC (Justice, Peace & Integrity of Creation) team in the United Kingdom, Britain.