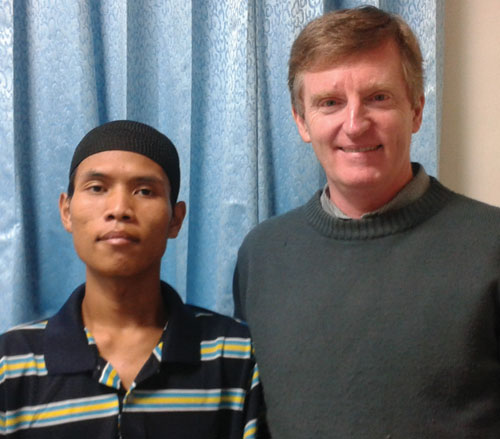 Columban Fr Peter O’Neill shares with us from Taiwan the story of Yudi.

Tears flowed down the cheeks of Yudi’s face as he listened to the voice of his mother speaking through my cellular phone while he laid on his ICU (Intensive Care Unit) bed fighting for his life. I was filled with emotion and elated joy standing by his bedside when I knew for the first time that Yudi was able to remember the sound of his mother’s voice. For 3 weeks this 21 year old Indonesian fisherman had been in a coma.

This is how I met Yudi. On October 17, 2014 I received a phone call from a Hsinchu City National Immigration Agency (NIA) police officer asking me to shelter an undocumented Indonesian migrant worker with a slight mental problem. I agreed to shelter the worker.

When I met him, I was shocked upon seeing how distressed he looked. In my few words of Indonesian I greeted him with the peace of Allah, and introduced myself saying I was Fr Peter, the Director of the Migrant Workers Centre. I asked his name. In a gentle and quiet voice he said, “My name is Yudi.”  They were the only words he spoke.  He was wearing a thick winter jacket despite the weather being hot and humid. I gently removed his jacket so he could feel more comfortable.

The police informed me that Yudi had gotten into a taxi and the taxi driver immediately knew that Yudi had some kind of mental problem.  The concerned driver drove Yudi to the NIA office to seek assistance from the police. Inside Yudi’s wallet was a copy of his passport, his Indonesian ID card and a few notes from South Africa, China and the Philippines. With this information the police were able to ascertain that Yudi was an international fisherman who had jumped ship.

Sister Lenny is our Indonesian case worker. She rang the Indonesian government office in Taipei to inform them of Yudi’s condition. They rang the placement agency in Indonesia and were given Yudi’s home phone number. Sr. Lenny rang Yudi’s mother. She was so distraught on hearing what had happened to her son.  She informed Sr. Lenny that Yudi flew to Singapore in January 2014 to board a Taiwanese owned fishing vessel. He slaved away at sea for 7 months with no days off and no pay. When the vessel finally docked at the Kaohsiung port in southern Taiwan Yudi rang his mother to tell her his employer had given his salary to his employment broker and his broker said it was the payment for his work placement. With no money to send home to his poor struggling family, Yudi decided to jump ship and try his luck in finding work in Taiwan. For several months he worked in the mountain region of Taiwan picking fruit 12 hours a day on a meager salary of NT$600 (US$20) per day.

I drove Yudi to the Migrant Shelter where I live with the migrant workers. Since Yudi was so agitated and could not sleep I took him to the hospital. The attending psychiatrist examined him and decided to sedate him so he could have a good night’s rest in emergency.

The next morning Sr. Lenny and I went to the hospital. Yudi had a big smile on his face when he saw us and was very calm.  When the doctor asked him if he was hearing voices he said he could hear the voice of his Taiwanese employer shouting at him.  The doctor prescribed 3 days medication. Three days later Sr. Lenny took Yudi for another consultation and the doctor prescribed 7 more days of medication. Each day it seemed Yudi was recovering well.

After being in our shelter for a week Yudi woke up in the morning finding it very difficult to breath. He was rushed to emergency and upon examination it was discovered that a virus had entered his brain through his blood stream. Tragically Yudi fell into a coma and was placed on a life support system. Every day we visited him in ICU waiting anxiously and praying to God that Yudi’s life will be spared. Two weeks later the neurologist informed me there was no hope for Yudi. Sr. Lenny rang and informed Yudi’s parents. They sent me their written agreement to have Yudi’s life support system switched off so he would not suffer any longer.

Miraculously after being in ICU for exactly 3 weeks Yudi took his first breath by himself. We couldn’t believe it. Neither could the doctor nor nursing staff. The breathing tube was taken out and Yudi started using an oxygen mask. A week later he spoke his first words and slowly began eating purified food. 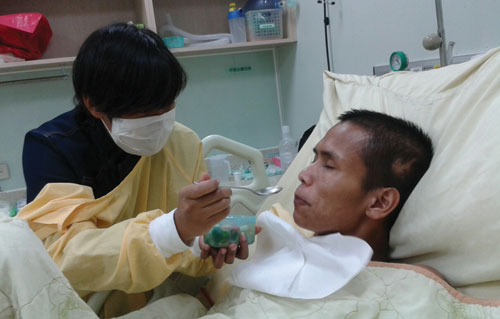 Unfortunately Yudi will have to be on medication for the rest of his life as the virus has done considerable damage to his neurological system. He has lost a lot of his memory but thankfully he can remember the names of his mother, father and younger brother.

Almost every day for 7 weeks I visited Yudi in hospital. On my last visit, the day before he was discharged, I decided to test Yudi’s memory by asking him a few questions. When I asked if his captain ever hit him he gestured by clasping his fist and hitting his head. From the first day I met Yudi my suspicion was that he was a victim of physical and mental abuse by his captain and a victim of human trafficking. Yudi’s story is one of thousands. Yet until now not one Taiwanese captain has been sent to prison for human trafficking.

Last week Yudi returned to Indonesia. Yudi has left a lasting effect on my life. His will to live and to survive the intolerable abuse of human trafficking empowers me to be even more vigilant in fighting for the rights of all migrant workers.

Yudi may the peace of Allah be with you.

Columban Fr Peter O'Neill first went to Taiwan in 1991. He is the Director of the Hope Workers Centre in Taiwan.