Fr Colm Murphy tells of Pakistan’s Christians and why Holy Week has a special significance for them.

Some years ago, on a visit to northern Burma, I met a German Sister, a theologian, who had come to give courses to the local clergy. Such courses were common in the territories formerly entrusted to the Columbans, due to Burma’s isolation from the rest of the world since the years immediately following the Second Vatican Council. They were part of a necessary updating of the local diocesan Church. 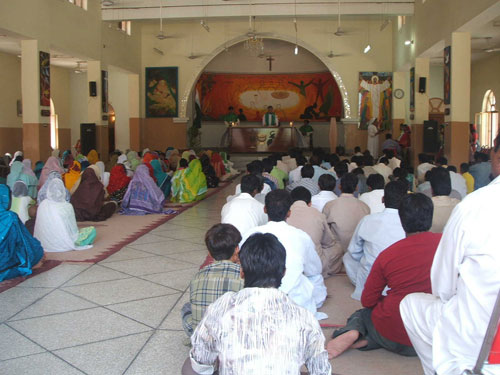 The Church in Pakistan

The German Sister had hoped that, at least in that diocese in north Burma, there would be as many men as women at Sunday Mass. She was disappointed to find that, even there, women far outnumbered the men in the congregation. Unfortunately it did not strike me at the time to suggest that she go to Pakistan. There certainly she would find as many men as women at Mass.

Ninety percent of Pakistan’s population is Muslim, and in the practice of their religion Catholics want to show that they in no way lag behind the Muslims. Among the Muslim population, men occupy the main section of the mosque at Friday prayers, and do so with great devotion. If women participate, they do so through a window from a separate room, or from behind a curtain. (The same holds incidentally for women Jews in Orthodox synagogues.)

Catholic men in Pakistan are certainly influenced by their Muslim neighbours though they would be loath to admit it. In Pakistani churches men and women are normally separated, women on one side, men on the other. But in the choir they sing enthusiastically together, accompanied by the tabla (small drums) and baga (mini organ).

The largest Catholic congregations in Pakistan are found during Holy Week, and especially on Good Friday. This phenomenon has always prompted Catholic missionaries like ourselves to wonder why this should be.

One reason may be because the Muslims do not accept either the crucifixion or the resurrection. According to the Koran, Jesus is the second among the prophets after Mohammed. They even believe that it is Jesus who will come at the end of the world to judge us. But they cannot accept that a prophet would die on a cross, and there can be no resurrection without a death. It is clear then why Catholics would want to demonstrate their faith in these two great mysteries by their enthusiastic participation in these rites. But, the Good Friday rites draw by far the largest crowds and perhaps there is yet another reason for that.

Identification with the Crucified

Christians lead extremely hard lives in Pakistan. Most are from the lowest castes and can only find work doing the most humiliating tasks. Typically they find jobs sweeping the streets and public places. Consequently they are always poor and poverty in Pakistan can be extremely cruel. Besides, though the great majority of educated Muslims are tolerant and wish their children to be educated in Catholic schools, there are many extremists who want Pakistan to be totally Muslim. Illiterate people are at the mercy of these fanatics and blindly follow them.

It is because of this that I have always insisted that the Columban radio programmes, aimed at improving relationships between religions, should be broadcast on medium wave and thereby reach the most isolated villages where everybody was probably illiterate.

Like other minorities in Pakistan, Christians are really persecuted. At the present time two women stand accused of blasphemy. One has already been sentenced to death, the other’s case is still in process. Even minor disagreements, or the desire to take over a Christian’s land, can lead to false charges of blasphemy. In recent weeks the Governor of the Punjab and the only Catholic Government minister have each been assassinated (see p.1, Panorama : Standing up to Tyranny) because they proposed changes to the present blasphemy law.

Another example of discrimination is that if a Christian drinks from a cup at a tea shop, the cup is often immediately broken - a most humiliating experience for the Christian.

In such a climate, Pakistani Catholics easily identify with the Christ of Good Friday and they flock to the ceremonies on that day. They come in great numbers on Holy Saturday also. On Easter Sunday Masses will begin very early, at six or seven o’clock and will continue until all the faithful have been able to participate. The Pakistani are truly faithful. Please remember them in your prayers this Holy Week.

Colm Murphyssc , a specialist in Catholic broadcasting, served in Burma, Korea, and Brussels, and France.