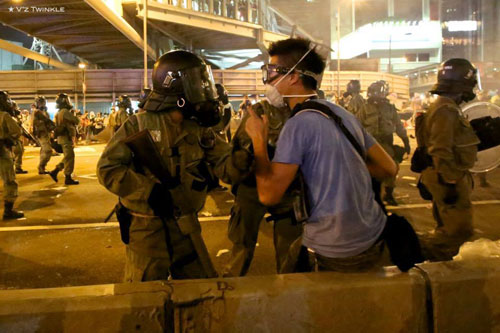 Just one year ago in the late twilight of September 28, police in Hong Kong fired almost 100 canisters of tear gas on a peaceful gathering whose only sin had been becoming so numerous that it spilled across one of the city’s main thoroughfares.

However, in government eyes there was another sin, as the gathering represented a direct challenge to the authority of the central government in Beijing, which had issued guidelines on universal suffrage that were simply unacceptable to large swathes of people in the city. For seven days students had staged a class boycott and gathered in numbers on a grassy area outside the government headquarters in Admiralty. The week featured lectures on democracy, study sessions and discussion circles, as well as nighttime concerts and entertainment.

But on September 28 as they moved to present a petition to the government, the civic plaza outside the headquarters was blocked off and the massing crowd was being forced to leave the grassy area.

Numbers swelled, spilled onto the street and eventually covered the six lane thoroughfare. The unexpected caused consternation in the government circles, as a separate, but connected initiative, dubbed Occupy Central, was threatening to block the streets of the downtown business district over the following days, two of which were public holidays.

The decision to tear gas may have backfired, as rather than retreat, the numbers swelled from a massed crowd to a milling horde, as its strength was bolstered by tens of thousands of people pouring into the area to lend support. 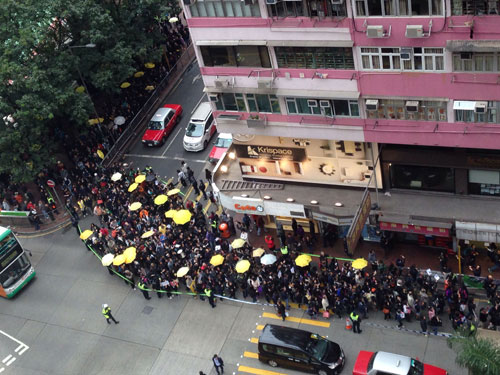 A representation of the Goddess of Democracy built by students at Tiananmen Square in 1989 with the Umbrella to signify the Hong Kong Umbrella Movement.

The people armed themselves with umbrellas as protection against pepper spray and the gathering became known as the Umbrella Movement—its colour, yellow. Later that evening Occupy Central was declared open and a Mass was celebrated in the undercroft of the government headquarters.

On September 28 this year, some 300 people gathered for an anniversary Mass on the same spot, which had become known as the epicentre of a movement that closed the main traffic arteries in the city for an amazing 79 straight days.

While Beijing did not back down or acquiesce to any demands of the people, the exercise was far from a failure. Big chinks in government authority were exposed. It did not clear the streets, simply because it could not. Instead, while the people sat in the streets, it opted to sit on its hands and wait for them to tire.

But the 79-day act of resistance has changed the political conversation in the special administrative region of China and left an indelible mark on the consciousness of the hundreds of thousands who either spent time in the streets or supported them.

The giant rally lacked a coherent leadership, as only a two- to three-day event had been planned, but it did manage to maintain a discipline, keep the area spotlessly clean, non-violent and develop a complex, yet constructive social structure and community life. On the first anniversary, people who took part were asked to reflect.

Lawrence An, a secondary school ethics and religion teacher, who took part in both the street occupation and the class boycott, said he believes that it only represents the beginning of a long fight.

However, he pointed out that he believes that what is important is not so much that they occupied the streets, but they also occupied people’s hearts. 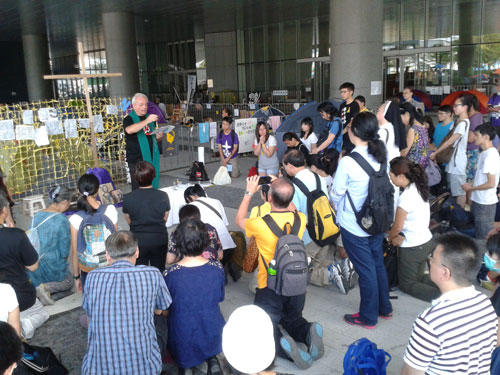 “Hong Kong people, including us Catholics, have been brought to a new scene or a new mode along the path of the fight for democracy, freedom and human rights, as well as issues related to people’s livelihoods,” An said.

For some, the battle began with getting there, as students particularly met opposition from concerned parents and family.

Clarence Lo Cheuk-fung said that from the time of the class boycott he faced opposition at home, as his parents thought it was dangerous.

“They also questioned me saying, what’s the point of protesting. No matter what, you will not be able to change the decision of the Chinese Central Government,” he explained. He added that his mother literally physically tried to stop him from joining the gathering crowd on September 28, but in the end he went anyway.

But some days later, he invited his mother to come to the site and walk around with him. “I told her about the experience I had gone through there and gradually she changed her views,” he related.

A religious education primary teacher, Monica Cheung, joined the class boycott and visited the Occupy site every night. She said that although others poured cold water on them, she learned that we should not wait to find a sign of hope before we act, but we must stand up on our own two feet and look, so that we can see the hope.

Esther Tam, a pastoral worker in a Catholic school, spoke of the importance of standing side by side with the students. She said that she found the willingness of so many people to exert their own power to help determine the destiny of others inspiring. “That’s why I came to this site every day,” she said.

Doris Law, a reporter for Cable TV, said that there were lots of mixed emotions to deal with. Working as a reporter demanded the professionalism of detachment, but as a born and bred Hong Kong person it was also a time of strong feelings sparking internal conflict. “For more than 70 days I have toiled in a state of internal conflict,” she said. “Lots of ups and downs, exciting moments versus angry times. Times of being a Doubting Thomas. Now I am weary in body and mind, but I can feel aspirations growing strong inside me.”

Fr Jim Mulroney is a Columban Priest and Editor of The Sunday Examiner which is the English language paper of the Hong Kong diocese.