On the front line

Columban Fr Colin McLean finds inspiration as well as violence in one of Brazil’s notorious “favelas”.

"Three more lifted the other night”, commented Fr Colin as he read the local paper over breakfast. “Two released, one not heard of since. The poor guy is probably dead by now.” 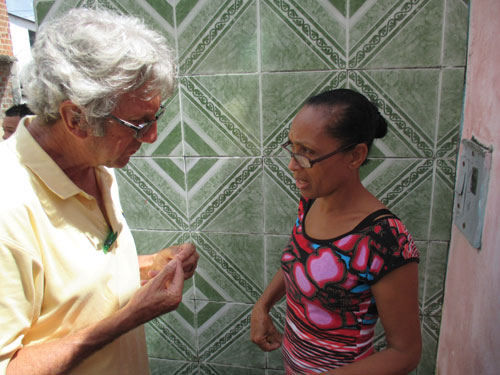 If he said this without a hint of surprise, it is because in 16 years as pastor of “Fazenda Coutos” parish he’s read it all before. Read about it, heard about it and seen it, along with most of his parishioners. The truth is that poverty, crime and violence are endemic in this sprawling slum on the edge of Salvador, Brazil’s third largest city.

The current wave of killings has come as the mainly black population finds itself caught in a war between drug gangs and the police. For years the gangs held sway over much of the area. Then, as part of a “clean-up campaign” ahead of the 2014 World Cup, the military police were sent in and set up shop next to the market. “Trouble is”, reflects Colin, “I don’t know if the police are the solution or just another part of the problem.”

He explains, that when a shooting occurs the police often don’t know who is responsible. People are too scared to speak up. “So the cops just round up a whole pile of suspects. Some they let go. Some they knock around a bit. Some just disappear. Usually, they turn up sooner or later dead.”

Many of Colin’s congregation have sad tales to tell. Senhora Valdelice, a Eucharistic Minister, has lost two sons in the drug wars. One Good Friday she offered to take the part of Our Lady in the passion play. “When she took Jesus in her arms”, Colin recalls, “It was like a Pieta for her murdered children.”

Senhora Luci Vera couldn’t find her son for a good while, until finally his body was discovered on the local refuse tip.

Even Colin himself has courted disaster. At one point he heard a commotion next door and ran round to find his neighbour shot dead. Later, he had to run for his life as five armed men arrived. “Presumably, they’d come to bump off any witnesses”, he adds. So, why does he stay? “Believe it or not”, he explains, “there’s a lot of good things going on here.” Good things that he himself has often had a hand in.

There is a vibrant Afro-Brazilian cultural scene in Salvador which Colin and his co-workers try to tap into. Dance and song come naturally to this exuberant people, providing a counter-weight to gangland violence. So, Colin encourages presentations of (Capoeira) among the young folk. Capoeira is a frenetic cross between dance and martial arts (reputedly perfected amongst slaves as a form of defence against cruel masters).

He’s set up a theatre group which specializes in stories of slavery and liberation. The group has performed widely in Brazil and abroad.

He and other like-minded Catholics have reached out to members of the (Candomblè) community. Candomblé is a fusion of Christianity and African religions. Long frowned upon by the Church authorities, contact with the movement is now encouraged, as the qualities of its spirituality become increasingly evident.

One day I followed Colin round his parish. We dropped in on a fundraising party run by two of Boleshis most inspirational catechists – Marcelo, an all-singing, all-dancing, guitar-playing Permanent Deacon and his Whitney Houston look-alike wife Lennie.

Later, we wandered down to the quayside for evening refreshments with the crews of some of the local fishing boats. “This is what I reckon it was really like for Jesus and His disciples”, grins Colin, “sipping their equivalent of a cold beer on the edge of Lake Galilee after a hard day’s fishing.” 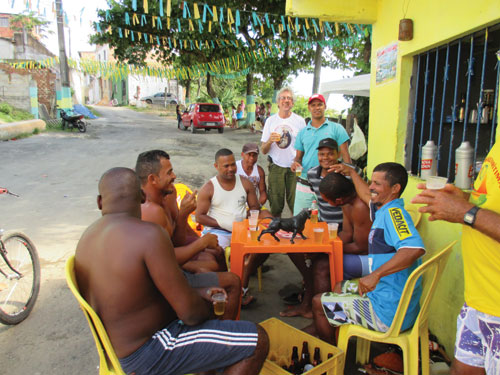 Columban Fr John Boles is English and has worked in South America since 1994. Australian Columban Fr Colin McLean is from Melbourne and has been a missionary in Brazil since 1985.

WHAT ARE THE FAVELAS?

Under the Portuguese and a newly-independent Brazil, some 3.6 million Africans were shipped to Brazil as slaves. Many entered through Salvador, the Portuguese colonial capital. They were put to work on the sugar, tobacco and coffee plantations and in the mines. Emancipation, came late, in 1888 (over 20 years after the abolition of slavery in the USA). Even then, they received little apart from their liberty, and in their thousands drifted towards the big cities in search of work.

They settled in shantytowns, or “favelas”, on the urban fringes, where they remain to this day. Conditions radically improved in the 1990s with an economic boom and a change in government, but the difference between the “haves and have nots” in Brazil remains a disgrace. Most recently, tensions boiled over in the pre-World Cup riots of 2014.

Fazenda Coutos and Lake Galilee? Maybe not so different all in all, when you think about it.