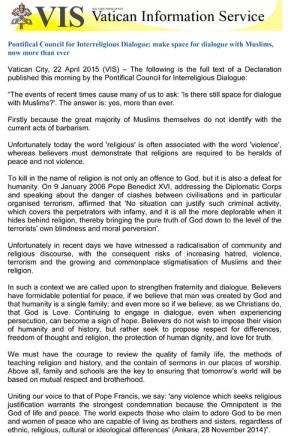 Vatican City, 22 April 2015 (VIS) – The following is the full text of a Declaration published this morning by the Pontifical Council for Interreligious Dialogue:

“The events of recent times cause many of us to ask: 'Is there still space for dialogue with Muslims?'. The answer is: yes, more than ever.

Firstly because the great majority of Muslims themselves do not identify with the current acts of barbarism.

Unfortunately today the word 'religious' is often associated with the word 'violence', whereas believers must demonstrate that religions are required to be heralds of peace and not violence.

To kill in the name of religion is not only an offence to God, but it is also a defeat for humanity. On 9 January 2006 Pope Benedict XVI, addressing the Diplomatic Corps and speaking about the danger of clashes between civilisations and in particular organised terrorism, affirmed that 'No situation can justify such criminal activity, which covers the perpetrators with infamy, and it is all the more deplorable when it hides behind religion, thereby bringing the pure truth of God down to the level of the terrorists’ own blindness and moral perversion'.

Unfortunately in recent days we have witnessed a radicalisation of community and religious discourse, with the consequent risks of increasing hatred, violence, terrorism and the growing and commonplace stigmatisation of Muslims and their religion.

In such a context we are called upon to strengthen fraternity and dialogue. Believers have formidable potential for peace, if we believe that man was created by God and that humanity is a single family; and even more so if we believe, as we Christians do, that God is Love. Continuing to engage in dialogue, even when experiencing persecution, can become a sign of hope. Believers do not wish to impose their vision of humanity and of history, but rather seek to propose respect for differences, freedom of thought and religion, the protection of human dignity, and love for truth.

We must have the courage to review the quality of family life, the methods of teaching religion and history, and the contain of sermons in our places of worship. Above all, family and schools are the key to ensuring that tomorrow’s world will be based on mutual respect and brotherhood.

Uniting our voice to that of Pope Francis, we say: 'any violence which seeks religious justification warrants the strongest condemnation because the Omnipotent is the God of life and peace. The world expects those who claim to adore God to be men and women of peace who are capable of living as brothers and sisters, regardless of ethnic, religious, cultural or ideological differences' (Ankara, 28 November 2014)”.