The souls of the just are in the hands of God

"The souls of the just are in the hand of God". Nothing greater nor more exact can be said of the man in whose memory and in whose honour we gather today. He was murdered four years ago because of his witness to justice, and mercy, and equity under the rule of law.  His blood is the seal upon the words he spoke in defence of individuals condemned to death through the abuse and misuse of laws in Pakistan which were ostensibly framed to protect the name of God.

We know, however, that these laws were framed by a military dictator intent on preserving his usurpation of power through a politicized use of religion.

Emerging legal opinion in Pakistan is that these laws themselves are incomplete in their legal formulation, and that protection and due process in and under law can be achieved for those accused by the completion of the writing and formulating of the laws rather than their abolition or repeal which would be politically provocative and socially destabilizing in present circumstances in Pakistan.

The murderers of Shahbaz Bhatti remain unknown. The murderer of Salman Taseer is showered with adulation and rose petals by members of the legal profession in Pakistan.  In May 2012, former President Asif Zardari spoke of the misuse and abuse of the blasphemy laws.  In August 2014, the Supreme Court of Pakistan handed down a legal opinion affirming the rights of all Pakistanis to religious freedom in accordance with both the constitution of Pakistan and the vision of Mohammad Ali Jinnah, the incompletely-formulated blasphemy laws notwithstanding. 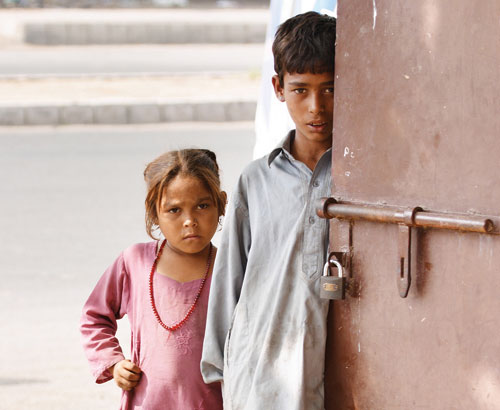 Exactly 400 years ago today, St. John Ogilvie, a 36 year old Scottish priest, was bloodily butchered in Glasgow.  As the knives were brought to slaughter him, he said "I am dying for religion alone.  For that I am prepared to give even a hundred times".  These are words that echo the motivation and the heart of Shahbaz Bhatti which are familiar to any of you who have read his last writings.  He gave the intimation that his blood would be shed as the seal, the seal into martyrdom, of his convictions.

We compare this with the bloodlust of Daesh and Boko Haram and the Taliban to take lives of others by the hundreds and the thousands: of innocent children in Peshawar, of the innocent in Nigeria and Cameroon, of the innocent in Libya and Iraq and Syria.  We compare it with the bloodlust of a mob of 400 people, in November 2014, at Kasur near Lahore, who thrashed a young 24 year old Christian man and his pregnant wife and then burnt them, incinerating them alive in the oven of a brick-kiln. Done in the "in the name of God"!  The time has come to label this lot as "kissai", as butchers, as butchers of human lives, with their knives and their butchery and their bloodlust.  And the time has come for Muslims to deny these butchers the title of "jihadi".

"No Pope can make evil good. No Pope has any power over those eternal moral principles which God has imprinted on our hearts and consciences. If any Pope has, with his eyes open, approved of treachery or cruelty, let those defend that Pope who can.... Craft and cruelty... eventually strike the heads of those who are guilty of them."

I am not speaking here of legislated principles decided by the majority of a political party or the attitude of the media, or the balance of an opinion poll. I am referring to "those external moral principles which God has imprinted on our hearts and consciences", the voice of which, try as much as we may, cannot be silenced:

"Cor ad cor loquitur" (heart speaks to the heart) was the motto of Cardinal Newman. This is echoed in the Urdu proverb "dil se dil tak rah hoti hai" ("the most sure road is the one from one heart to another). A person may deny God but cannot silence the insistent voice of heart and conscience.  Whether one wishes to listen is another issue.

I wish to present two points which are relevant to affirming and asserting the right to religious freedom both in the context of the witness of Shahbaz Bhatti in Pakistan and in the situation which confronts the world today. These are, firstly, what I call the "national heart" of countries, and the invocation of God.

Shahbaz Bhatti challenged the mind of Pakistan by speaking to its heart. The urgent demand of us is not to mistake the terrible acts of violence being perpetrated in Pakistan by butchers masquerading as "soldiers of God as being representative of the heart of the nation of Pakistan. The Taliban and the violent fundamentalists in Pakistan who killed Shahbaz Bhatti and Salman Taseer, who butcher little children in schools, and who blow up innocent worshippers at prayer in mosques and churches may have seized the headlines of the international media but they do not own or represent the heart of Pakistan. And similarly for Nigeria, and Iraq and Syria and more. The heart of a nation is greater than the brutality of perverted men and women who butcher and kill and oppress falsely and perversely "in the name of God".

This perverse brutality and butchery and savagery and oppression is carried out in the name of God. But it is an idolatry.  God is almighty, compassionate, and merciful.  We who are Christians call Him in truth and in faith and in devotion "Our Father". Compassionate to all and merciful to all, and so to limit the boundless limits of the mercy and compassion of God to the dimension of one's own ideological boundary or sectarian imagination is atheism.

The problem with the Daesh and Taliban and Boko Haran is not GOD but ATHEISM: an atheism which is the absence of God in spite of banners and slogans which proclaim His name, or the presence of a limited "god" manufactured and controlled by human reason, passion, and lust, and erected in contradiction and opposition to GOD. The crisis of religious freedom is ostensibly about God, but in reality it is a crisis created by these religious terrorists who make themselves their own centre in place of God. These religious terrorists are rationalists and kaffir who have established themselves as controllers and manipulators of God.

An "abomination of abominations" has been set up by fundamentalists and religious terrorists who, while pulling down monuments of past eras and epochs, have carved from their own ideologies a new idol whom they call "Allah" or "God" and before which they commit the abominable evil of slaughter and butchery of men and women and children all created in the image and likeness of God. Irreligion masquerades as religion. Atheists masquerade as believers. Rationalism masquerades as Faith Butchery masquerades as devotion. An Idol being erected in place of God. We who are believers understand the horror, the blackness, the deceit, and the presence of the Prince of Lies in this masquerade being perpetrated in the name of God and faith.

The following are implications which I propose as impinging on the contemporary crisis of religious oppression:

As a boy growing up in the village of Khushpur in the rich agricultural plains of the Punjab in Pakistan, Shahbaz Bhatti knew the rhythm of the cultivation of wheat and rice.  He understood that "unless a grain of wheat falls into the earth and dies, it remains alone; but if it dies, it bears much fruit." We this afternoon are witnesses to this.

Fr Robert McCulloch has been a missionary in Pakistan since 1978. He now resides in Rome after taking up an appointment in late 2011 as the Procurator General for St Columbans Mission Society. Fr McCulloch returns to Pakistan several times each year.