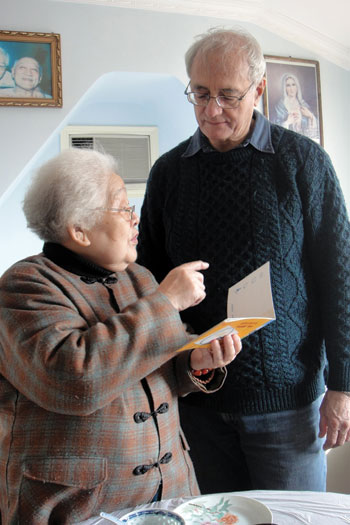 Columban Fr. Warren Kinne writes from Shanghai, China, about a former diocesan religious sister, Monica, who died earlier this year. He wrote soon after her death.


Monica was buried recently. She would have been 100-years-old next year which is the year, please God, I reach 70. She more or less had my father’s birth-year and was somewhat older than my mother would have been had she still been alive.

What a wonderful person who just a week ago was full of humour and energy. I liked to visit her and was a bit embarrassed about the way she would fuss over me. It was just over a week ago that I last saw her. She always gently chided me: “When was the last time you came”? I liked to come unannounced so that she didn’t put on a big meal that I didn’t want and she shouldn’t have needed to bother about.

Monica – Xia Jing Xian – had been a diocesan religious sister of the group that Bishop Galvin set up in Hanyang, the diocese he was responsible for in China. Bishop Galvin along with Fr. John Blowick had founded the Columbans in Ireland in 1918. She vividly remembered Bishop Galvin and so many of those early Columbans who worked in her home diocese. She could rattle off names and was forever eulogizing those early missionaries.

Bishop Galvin disbanded the group when the Communists came to power over 60 years ago. Monica had for a long time hoped that the group could be reconstituted but that came too late for her. She married and spent her life working as a nurse.

I lack so much exact and accurate information - dates and names - like most of us do with parents and grandparents. We only realize it fully the moment they are gone.

My problem had also been her Hubei accent. There were priests I would have known but their Chinese names were unknown to me and there was the confusion of that different phoneticization that I was used to.

As Monica died last week, I am a week late to gather all that rich archival information. But it doesn’t matter - my memory of her is of her love and her faith and her warmth towards the Missionary Society of St Columban. It made me mindful and appreciative of the work of the group I belong to and of those who have gone before me. Now all I have are memories and those intriguing but inaccurate details about her life.

From what I have learned, Monica was born in 1915 in Xiantao, Hubei Province in a town then called Mianyang. She was one of two girls and three boys in the family. In 1935 there was a huge flood and the dam on the Yangtze River near their hometown burst so the whole family took a small boat to Hanyang. There she studied at a school run by the Columbans and became an embroidery worker. Later she joined the diocesan sisters and studied nursing and was later to become an operating theatre nurse. In her career as a nurse she worked at the Columban Hospital in Nancheng in Jiangxi Province. In Shanghai, after the group was disbanded, she worked in the former Catholic Hospital now called the Rui Jin Hospital.

In 1970 she married a man who had wanted to marry her for over ten years prior to this, but she had kept insisting that she was a nun. They had a happy married life until he died in 2008.

I couldn’t even make the funeral. Her household help and a distant relative rang me and said that “she had gone.” I wondered, momentarily, if she had “gone away” on holidays. The reality only sunk in slowly as she was in fine fettle just a week ago.

On Sunday after Monica’s death, I had agreed to a Mass at St. Peter’s Church, near where I live in Shanghai, at exactly the time of the celebration of her life in the funeral parlour. But she would have preferred it that way - to be remembered in the Mass.

I loved to take people to see her, and she too enjoyed the company. My two sisters and a niece met her as well as Chinese friends and a handful of Columbans who visited. She was always welcoming. She wanted to give gifts to me – coffee and biscuits that I didn’t need. She would stand up and rummage about in her cupboard looking for something. She would stuff me with food that I didn’t really want. Monica was a glimpse into a past I hadn’t experienced and a China I didn’t know.

Monica always wanted a blessing and would check to see that I had enough warm clothing on. She was full of humour, and her sympathy was decidedly with the “unofficial” Church.

There will never be another Chinese Monica. We live in that river of time. Only eternity will reunite us to those moments we fleetingly cherish on this ever so fast journey of life towards our future with God – and with hopefully Chinese Monica.

Columban Fr. Warren Kinne has lived and worked in Shanghai, China for many years.