Vatican cricket, a Catholic vs Muslim match and the Karachi connection 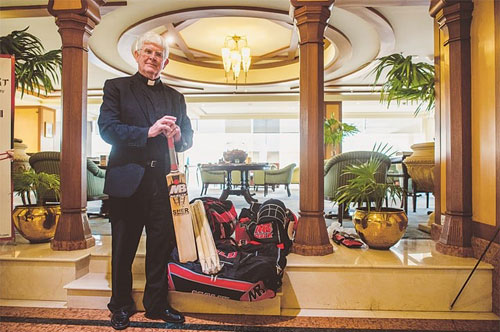 Father Robert McCulloch poses with the Pakistani cricket equipment he will be returning to Rome with for the upcoming high-profile match between the all-Catholic Vatican CC and the all-Muslim Mount CC teams.—Mohammad Ali / White Star

Father Robert McCulloch poses with the Pakistani cricket equipment he will be returning to Rome with for the upcoming high-profile match between the all-Catholic Vatican CC and the all-Muslim Mount CC teams.—Mohammad Ali / White Star

KARACHI: Bats, wickets, helmets, team bags for all this cricket equipment and a Catholic priest in the middle of it! “I know, I know, you must be wondering why I am not around Bibles or crucifixes instead but this is also good work that I am doing here,” laughed Father Robert McCulloch, a Columban priest, is a founding member of the Vatican Cricket Club, who, before being assigned to the Vatican, spent 34 years in Pakistan for missionary and social work and still visits several times every year.

Six days ahead of the Twenty20 cricket match between the Mount Cricket Club (Mount CC) from Yorkshire (an all-Muslim team) and the Vatican CC (originally named St Peter’s Cricket Club) in Rome, Fr McCulloch is in Karachi again, packing the cricket equipment he came here for. “It’s been donated by Rodolfo J. Martin-Saravia, ambassador of Argentina to Pakistan, who’s a friend of Pope Francis and also Archbishop Joseph Coutts of the archdiocese of Karachi,” he shared.

The great Christian-Muslim harmony story with a team of Catholics from the Vatican and Muslims from Yorkshire begins in England last year when the almost 40-year-old Mount CC first heard about the new Vatican cricket team and their tour of England where it played a series of matches, which included encounters with the royal household at Windsor and the Archbishop of Canterbury’s XI.

“That’s when Mount CC approached the Vatican for a possible match between their team and ours. Also, just last month, Pope Francis, on his way back to Rome after his Cuba, UN and USA visit answered a question put to him about international, national and religious conflicts and divisions by saying that ‘walls are never solutions but bridges always are’.

The upcoming sporting encounter between Muslims and Catholics will be a good bridge. It won’t perhaps embrace the whole world but it will gather players and spectators in friendship, energy, good competition and a desire to win without pushing the other lot off the bridge!” said Fr McCulloch.

“But that’s not all. The match between Mount CC and the Vatican CC to be played on October 17 has another Karachi connection as the Vatican wicketkeeper is Aamer Bhatti, a seminarian from Steel Town here,” he pointed out.

The Vatican CC is in good form these days having played and won two matches against two other visiting teams from England over the last week and one coming up against a visiting Argentinian team. The match on the 17th is to be followed by another by the Vatican CC against the Archbishop of Canterbury’s XI on the 24th.

“Football is the more popular sport in North and South America but in Europe and South Asia we like cricket better,” said Fr McCulloch. “The Vatican CC has players from all the cricket-playing nations; besides the wicketkeeper from Pakistan, the team comprises seminarians from India, Sri Lanka, Australia, etc. The captain is a young English priest, Fr. Anthony Currer, working in the Vatican,” he added.

When asked if they were following a quota system for selecting players in the Vatican, the priest smiled and explained that the inspiration for the Vatican team actually came from the Australian ambassador in 2013 when he noticed many seminarians and priests from the cricketing world at the Vatican and commented what a pity it was that they didn’t play cricket. “In Rome, there are hundreds of seminarians from all over the world. We have our selectors but the Catholic nature of thinking is of maintaining balance. Therefore the team is balanced internationally,” he said.

So why doesn’t the Vatican team have Muslim players since they believe in ‘balance’? Fr McCulloch laughingly pointed out that there are only Catholic Christians to be found in the Vatican.

About umpiring and whether they have managed to find neutral umpires for the Mount CC vs Vatican CC match and what faith do they belong to, he said they were neutral all right but not really because of their faith.

The matches will not be played in the Vatican though. They will be played at the Capannelle Cricket Club a little away from there. “You never know in cricket. The curators of our gardens say that there are too many cultural treasures in the Vatican to risk big hits and flying balls smashing into windows,” he shared.

Asked if they are expecting big crowds, Fr McCulloch nodded. “The matches are free to watch for the spectators. Then bishops and cardinals from all over the world are gathering at the Vatican around this time for the Synod on the Family so we are expecting many bishops to slip away from the gathering to witness the match. It will be the first time for an all-Catholic side to be facing an all-Muslim side. It is going to be a high-profile encounter,” he said.

“Though there is no ticket there are opportunities for plenty of donations that will be used to assist Syrian refugees like we used last year’s donations against human trafficking,” he added.

And is Fr McCulloch, a cricket lover and follower of the game from his youth, who says that he is too old to play now, be doing the commentary? The priest chuckled: “I don’t think there will be any need for commentary. With the constant clicking of rosary beads on one side and tasbeeh beads on the other throughout the match, no one would have time to listen to commentaries. They would be too busy praying for their respective teams!”