Why are Columban priests and lay workers heading to Paris? 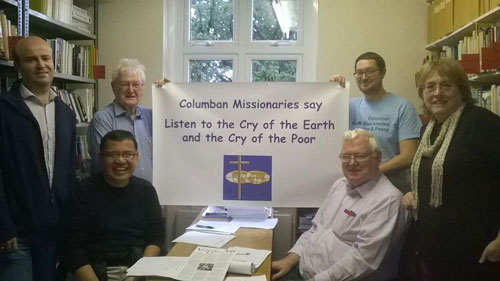 First, they continue action on Climate Change which has been part of Columban mission work for more than three decades. Experience in Peru led our missionaries to know that care for the poor means care for the land - the twin cry of the suffering land and people. Experience in the Philippines led Columbans to lament the loss of the God-given diversity of species as the rainforest and coral reefs were devastated. God's revelation was being dimmed and the poor were losing their livelihoods.

Second, in Paris, Columbans are offering encouragement to the people of diverse languages and cultures who are rising up because of their concern for Earth as our 'common home' as Pope Francis expressed it. People of diverse religions, or none, are united in listening to the decades of warning by scientists that humanity is using the Earth as an experiment. Ever increasing amounts of greenhouse gases poured into the atmosphere are changing the Earth's natural cycles on land and in the sea.

In spite of the warnings by every Pope since the time of Paul VI about the environmental crisis facing humanity and choices governments must make, and in spite of the warning of many missionary churches, both First World local churches and people have been slow to change their ways. Church theology has been slow to take the natural world of evolving creation seriously. Governments have been slow to implement policies to produce renewable energy that supports sustainable lifestyles.

When the Pontifical Council for Justice and Peace called a Consultation on Climate Change at the Vatican in 2007, more than half of the invited guests were climate change deniers. Eminent scientists and archbishops were ridiculed by a selected group of lobbyist from the fossil fuel industry and acolytes from some universities. Thank God for new direction under the leadership of Pope Francis given in his encyclical Laudato Si'.

Often in the English world and churches, climate change denial is a real problem. Vested interests play on the scientific ignorance of many voters. They finance campaigns of fear to undermine carbon trading methods as they did in Australia. In John 8:44 Jesus called the devil the 'father of lies'.

Advent is a liturgical time when all believers are called to remember the actions of God in preparing for the coming of Jesus the Christ - cosmic revelations and diverse religious expressions. Lent is a time to turn back to God with all our hearts. Maybe the time has come to develop the month of September as a Season of Creation? Pope Francis has named 1 September as a special day and given us at least three major graces to remember and celebrate - all creation as revelation; the integrity in itself of every bit of creation; the call to communion between every creature, God and ourselves.

Why are Columbans in Paris?  To celebrate that - inspired by the mission churches where they worked - in 1988 the Columban Society put 'Care for the Earth' into its Constitutions; to join in solidarity with all peoples as they ask their government leaders to face the climate change crisis with immediate worldwide agreements implemented with strong local national laws.

The Columban representatives in Paris will be Australian Fr Charles Rue and, from Britain’s Columban JPIC team, Ellen Teague and Julia Corcoran.