Archbishop Sir David Moxon KNZM, Archbishop of Canterbury's Representative to the Holy See and Director of Anglican Centre in Rome, in an email 20 January, 2016 thanked Fr Robert McCulloch (Procurator General of the Society of St Columban) for his great and loving initiative and efforts regarding the sharing of the crozier head of Pope St Gregory the great with the Archbishop of Canterbury and the Primates meeting at Canterbury this January.

Relics of St Gregory and St Augustine on display in Canterbury 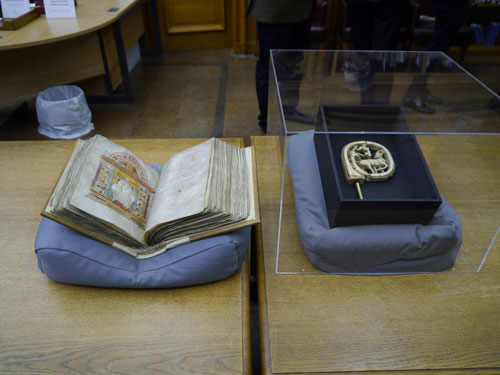 Just before leaving Rome, Columban Fr Robert McCulloch came to Vatican Radio to talk to Philippa Hitchen about the significance of this important ecumenical event…

(Vatican Radio) - Relics associated with St Gregory the Great and St Augustine of Canterbury brought together in Canterbury Cathedral next week as Anglican leaders meet for an encounter concerning the future of the worldwide Communion.

Part of a precious pastoral staff from the Rome Church of San Gregorio al Celio is being shipped across to the UK on Friday, where it will be on display, alongside a rare 6th century book of the Gospels given by Pope Gregory to St Augustine as he set off on his mission to take the Christian faith to England. The manuscript is the oldest surviving Latin illustrated Gospel book and one of the most ancient European books in existence.

The idea of loaning the relic, just ahead of the annual week of prayer for Christian Unity, was the brainchild of Australian Fr Robert McCulloch, a longtime missionary in Pakistan who currently serves as Procurator General of the Society of St Columban here in Rome. Fr Robert, together with Rev Marcus Walker, Associate Director of Rome’s Anglican Centre, will accompany the relic on its historic pilgrimage to and from Canterbury Cathedral.

Fr Robert says the relic is an ivory carved head of the pastoral staff traditionally associated with Pope St Gregory the Great. It was he who, in 597, sent St Augustine to convert the English after the famous incident at the Roman forum where he saw some English slave boys and called them ‘not Angles, but angels’ (non Angli, sed angeli). The story, Fr Robert remarks, underlines Pope Gregory’s concern for evangelization throughout Europe.

Fr Robert says the idea of this ecumenical venture came to him after the Archbishop of Canterbury, last July, invited Australian Cardinal George Pell to celebrate Mass at the High Altar of Canterbury Cathedral – the first cardinal to do so since the Reformation.

Fr Robert notes with a chuckle that all the necessary permits and insurance documents were gathered from the Vatican, the Italian government ministries and the British government in just two weeks – described by some as an ongoing miracle of Pope Saint Gregory the Great!

The relic, valued at £250.000, will be escorted by security guards to the airport in Rome, and again from Heathrow airport to Canterbury Cathedral, where it will be officially received by the Dean at the conclusion of Evensong on Friday.

It will go on public viewing for the weekends of January 9th/10th and 16th/17th and during the week it will be available as an object of meditation for the Anglican Primates meeting at their closed door encounter.

On January 15th the St Augustine book of the Gospels will also be on display there, in what Fr Robert describes as “an extraordinary coming together” of the head of the staff, symbol of ecclesial authority and the book of the Gospels, symbol of the authority of the Word of God. He notes that the relic will be returned to Rome on January 18th, the first day of the Week of Prayer for Christian Unity, thus through this particular object, he says, we can recapture the missionary link in common faith, heritage and history between Catholics and Anglicans. 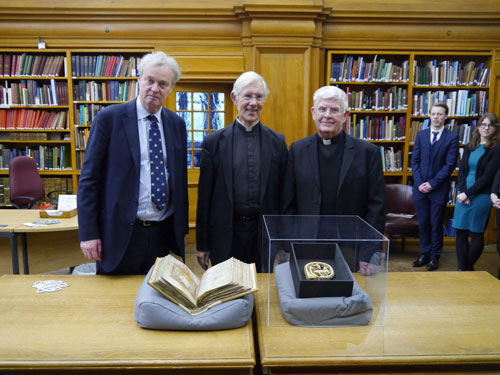 Read blogs on the Journey of the Crozier

2016
Unexpected Blessing, being invited to join Pope Francis in giving the pontifical blessing - 26 January 2016
Reconciliation: An exhibition to celebration 50 years of the Anglican Centre - 15 January 2016
You can follow the Journey of the Crozier as it made its way to Canterbury - 8th January 2016