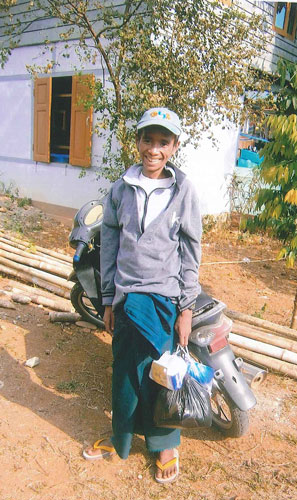 Naw Awng is a wee boy of 18 years whom I have known since 2009 when he first came to our Shelter.  Naw Awng is an orphan since he was five years old.  Both of his parents died within three years of each other of AIDS leaving Naw Awng with his grandmother for her to rear him.

When he came to the Shelter the first time he was very small for his age, was so skinny that you could count his ribs he had a certain sadness in his eyes and could hardly walk. He was diagnosed as having acute T.B and a lateen stage of HIV.

Gradually with good nutrition and tender loving care he began to gain energy and to be able to move slowly around the shelter. At that time he stayed at the shelter for six months and returned to his grandmother home about four hours train journey from the Shelter.

Six years have passed till one evening about two months ago when this very emaciated small man came to the shelter and who did I recognize in the faint smile but my friend Naw Awng. With severe malnutrition and repeated occurrence of T.B.; he looked like an old man in a child's body structure. We took him in like a lost friend and listened to his story. He has been struggling these past six years to help his grandmother to provide for the two of them.

He stopped going to school at 4th grade because of financial poverty.   His grandmother is over 80 years old and her sight is very poor.  She has rented out one room in their house for 8000 Kyat ($8) a month and that is all the two of them have to live on. In order to help his grandmother survive Naw Awng went last year to work logging wood to earn some money. His poor little body was not able for the strenuous work and gradually he became ill and had to return home. He returned to the HIV clinic and once more back in our shelter. He is now in our care over three months and at last he is beginning to show signs of life and fun.

Children like my friend Naw Awng are cruelly wounded in places where HIV disease is epidemic. They have to come to terms with the loss of their parents and they have to seek out a means of survival for themselves. Like Naw Awng many of them have to become the main supporter. Homes of many of the children like Naw Awng are a collapsing bamboo cabin void of fun, happiness, having a nice meal, being admired or praised. Having somebody take time to listen to how it feels to be different because I am HIV positive or to have to live without one or both parents.