Building homes for the homeless 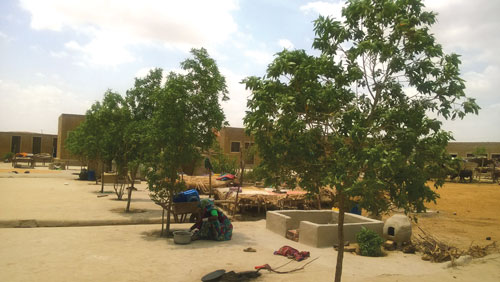 Many people in Sindh province in south-east Pakistan are homeless. In response to the needs of people who lost everything during floods of 2011-2012, St Elizabeth Hospital in Hyderabad stepped in to set up the government - approved Bethlehem Shelter Society to begin and oversee house re-building projects.

This has stretched the energy of St Elizabeth beyond the normal parameters of being a healthcare provider but it has been a growth point for the hospital staff in understanding its call to manifest compassion. It has also enhanced the standing of Catholic healthcare at the provincial government level. So far we have been able to construct more than 850 permanent and semi-permanent homes totally through the help of generous donors.

At Jhirruk, the Bethlehem Shelter Society purchased four acres of land to build 80 permanent homes. The final construction work is underway. We now need to add connecting verandahs to provide shelter from monsoon rain and intense summer heat. Happily the few families still living in grass shacks at Jhirruk will be given a permanent home and place to live by Christmas 2016.

Jhirruk used to be a empty desert of rock and sand. Now there are permanent homes, a small “town plan”, flowing water and storage, waste water disposal, bathing facilities, tree plantation, perimeter wall and a clinic. People of the community are members of the governing body of the Bethlehem Shelter Society.

Their community leader is a 45-year-old Hindu woman, Reshma.  A vibrant community has emerged from the disaster of flood destruction. 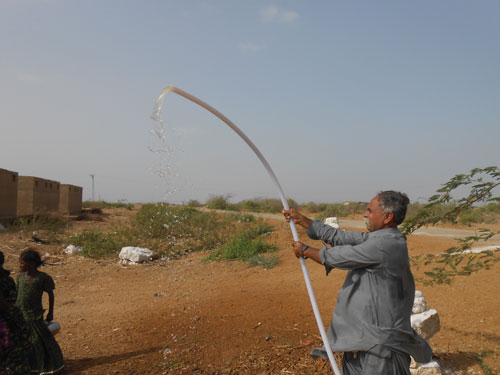 How good is going just 20 meters for running water instead of walking 2kms several times a day? The Parkari Kholi tribal Hindu women and girls at Jhirruk in Sindh in southern Pakistan know that it can’t get much better (well, may be it could when electricity is connected but that is the next plan).

Men work in the fields and so do women but they also gather water and fuel. Necessity over thousands of years has divided up responsibilities. Photos of women walking with a clay pot on their head and one under their arm to fetch water are colourful but say nothing of the unending burden which traditional custom has loaded on them.

On July 5 this year water flowed into Jhirruk from a permanent connection at the canal which carries water to distant Karachi from the Indus River. Cooperation from government officials in Pakistan and the generosity of donors came together to make this possible. James Francis, Executive Secretary of Bethlehem Shelter Society wrote, “water has arrived and begun to flow. The people are overjoyed to get fresh water at their door steps. I personally checked the water pressure which is a great success.”

Large water storage tanks have been constructed throughout the settlement of 80 houses for both drinking and cooking purposes and separately for bathing and washing.

Water coming generously to Jhirruk recalls the promise in The Book of Revelation in the Holy Bible of “the river of the water of life flowing through the city” (Rev. 22.1).

It also means that Pakistan has come one small step closer to fulfilling the UN Millennium Goal No.7B for providing people with sustainable access to safe drinking water and basic sanitation.

Columban Fr Robert McCulloch was a missionary in Pakistan for 34 years.  He is currently the Procurator General of the Society of St Columban in Rome.