Christmas celebrated at the Pakistan Embassy in Rome 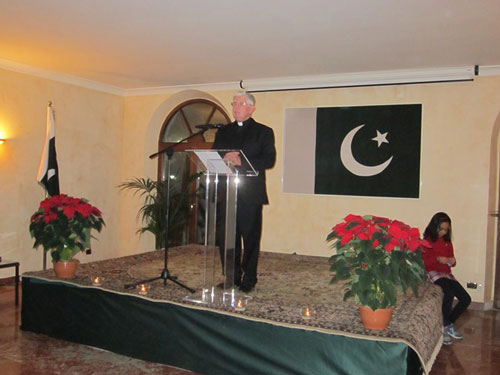 Ambassador Nadeem Riyyaz of the Islamic Republic of Pakistan to Italy again hosted the annual Christmas celebration on December 14 at the embassy chancery in Rome. The celebration was attended by Pakistani seminarians, sisters and priests studying in Rome as well as members of the general councils of religious congregations who have foundations in Pakistan.

Members of the diplomatic corps including the ambassador of Italy to the Holy See, chancery staff and Pakistanis working at FAO and other international organizations based in Rome were also present. The celebration including singing of Christmas carols in Urdu, Punjabi, Italian and English.

Fr Robert McCulloch, Procurator-General of the Missionary Society of St Columban, thanked Ambassador Riyyaz for hosting the Christmas celebration and extended greetings both for Christmas and for the Muslim feast of Eid-e-Milad-ul- Nabi which had been celebrated several days earlier. Fr McCulloch noted that this was the fifth celebration of Christmas at the Pakistan embassy which had been begun by Ambassador Tehmina Janjua, currently the Pakistan ambassador to the UN in Geneva. Both ambassadors received their education at Catholic schools in Pakistan, Ambassador Janjua from Jesus and Mary convent schools and Ambassador Riyyaz from the Patrician Brothers at St Anthony’s High School in Lahore.

Fr McCulloch thanked Ambassador Riyyaz for his outstanding gesture of friendship which manifests the commitment both of the Pakistan Embassy in Italy and of the Government of Pakistan to work towards religious harmony.

Columban Fr Robert McCulloch was a missionary in Pakistan for 34 years. He is currently the Procurator General of the Society of St Columban in Rome.