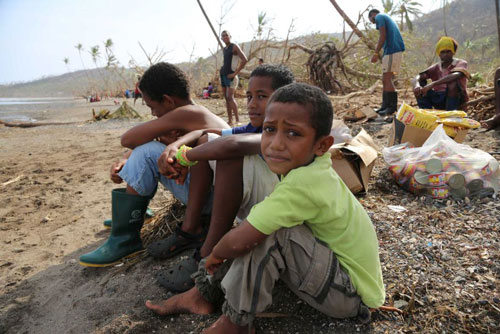 The mainly Catholic village of Nacamaki where most of us Columbans have gone to improve our Fijian after doing our initial study in Suva - we usually spent six weeks to three months there - was completely wiped out. Only four houses left standing in the entire village. We usually stay with the Catechist, Savenaca, in the "Priest's House" next to the Church. Both Church and priest's house were destroyed - along with the Methodist church and the very fine village hall.

The miracle was that nobody was killed. Why? The village - like many Fijian villages - is built on the sea shore. The villagers had carved a football field out of the hillside a hundred metres above the village. They all fled there, huddled together in the wind and rain until it was over - about three - four hours and survived. Thank God it happened during the day when people could see where they were going. Had it been night they would all have died.

This was only one of the many villages that were hit on beautiful Koro Island. Savenaca, the village catechist, and his wife, have nothing left except the clothes they wear. How do you rebuild a whole village? But they will.

Days earlier Fiji became the first country in the world to formally approve the UN climate deal agreed by 195 nations in Paris in December. The motion was proposed by the country's attorney general, Aiyaz Sayed Khaiyum. He said tackling climate change was a major priority for the archipelago, which could face wide-scale flooding, fiercer tropical storms, and depleting fish stocks as a result of the world's changing climate.

Columban Fr Donal McIlraith has been chaplain to the Banaban and Gilbertese communities in Fiji since 1990 as well as teaching scripture classes in the Pacific Regional Seminary. He is currently the Regional Director in Fiji.