Columban gift to the Church of Myanmar

Columban missionary priests first went on mission in Myanmar in the 1930s. Now, the Columbans have decided to assign a new team of missionaries to Myanmar. 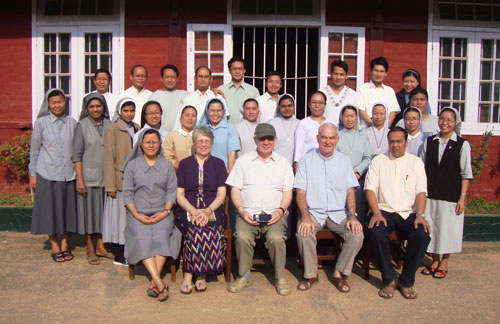 The End of a Beginning

“I have come to inner freedom by finding out my real self. I have a different image of God and prayer is now more meaningful,” said Sr Lucia Raw FMM, a participant in the recent Myanmar Summer School for Formators. This course for personal transformation and for the training of religious formators was started by Columbans Frs Michael McGuire and Frank Hoare and Columban Sr Mary Ita O’Brien in 2003. In March 2015 they handed it over to a fully trained Burmese staff of priests and religious.

The Need to Train Formators
Columban missionaries worked in the north of Burma/Myanmar from 1936 until 1979, when the military government made it impossible for missionaries to remain. Afterwards the Society continued to support the first local bishop, Paul Grawng, and his young priests. Twenty years later, as it became possible again to visit Myanmar, Fr Eamon O’Brien SSC organized directed retreats for clergy there. A local priest who was appointed to be a formator, asked for help. Fr Eamon requested staff and financial help from the Columbans and Bishop Grawng received the backing of the Bishops Conference for a national formation course in 2003. Thus began the Myanmar Institute for the Formation of Formators (MIFF). The course was accredited at first by Miltown Park Institute, Dublin and later by the Institute for Religious Formation, Manila.

The Columban staff members decided on a three year course. Each year’s course consisted of a four week intensive summer school in March, three two day seminars during the year and three essays or projects to be done before the following summer school. Psychology, Spirituality and Christology were the broad areas to be studied. Practical skills training in listening, counseling and spiritual direction were added as afternoon activities during successive summer schools. Staff members did personal accompaniment with the participants during each summer school.

Bishops and congregational leaders sent participants to the course. A few lay people were also invited to attend. One is Columban Myat Ag who said, “Getting to know Jesus and his values has made me proud to be a Christian and a Catholic.” Columban has now applied to join the Missionary Society of St Columban.

Most of the almost 80 graduates, from all parts of Myanmar, served in seminaries and formation houses throughout Myanmar. Some met opposition from other priests and religious who were trained in the traditional model of formation. Change always involves tension between old and new. 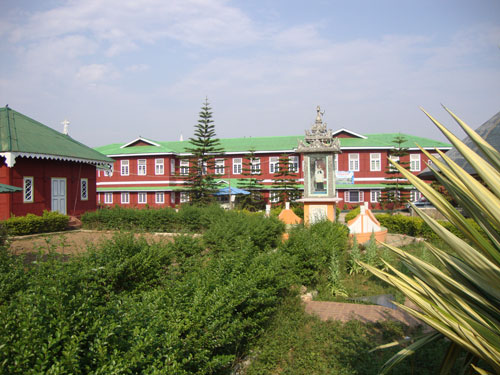 A New Model of Formation

The existing model of formation in Myanmar has been based on those who have poor self-esteem. The course stressed a model of formation based on human development and on internalizing and living the values of Christ. The formator is to be a guide accompanying and encouraging the young person. She (or he) encourages and helps them overcome personal blocks which obstruct internalization of values. They encourage the students to learn from their mistakes in an atmosphere of acceptance and love.

Practice as well as Theory

Pyin Oo Lwin where the summer school is held at St Aloysius Minor Seminary has a number of religious novitiates. There are also two Catholic parishes in the town. The summer school participants are able to conduct three counseling and four spiritual direction sessions each with two novices or two lay volunteers. These sessions were supervised by staff members through  discussion of reports in small groups. This supervised practice helped the course participants to apply the theory they were learning. They grew in confidence and in competence as they reflected on their approach and practiced their skills. One of the priests, Fr Rafael Khaing reflected, “I discovered that to be a spiritual director, you must have experience of God.”

The Columban staff selected the best participants from each group to join them on staff as interns in succeeding courses. We also encouraged these interns to further their qualifications through formation studies in institutes abroad. At the end of our 2015 summer school a well-qualified local staff, led by Fr Cyprian Aung Min Ph.D. and Sr Lucia Hing Pai FMM L. Psych., was ready to take over. They will run the fifth course from March 2016 to March 2019. 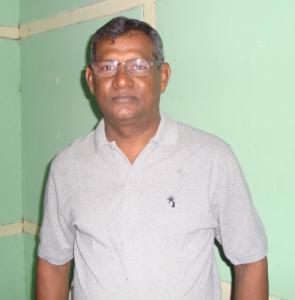 The Service Phase of MIFF

Most of the MIFF graduates serve as formators in seminaries, postulancies and novitiates. However, they have also responded to requests to speak to gatherings of priests and religious and to organize seminars and workshops. Some of the graduates did further training programs in spiritual direction and directed retreats and are now available to the Myanmar Church for these apostolates. Fr Simon Tin Maung is the Director of this service phase of MIFF work and presides at a graduates’ conference each year.

Archbishop Emeritus Paul Grawng will continue to mentor and guide the Institute and to liaise with the Bishops Conference, as heretofore. He believes that it is providential that the Formation Institute has become well established at a time when the local Church faces the challenge of Myanmar opening up to the outside world.

For me personally and for my colleagues, Fr Michael and Sr Mary Ita, these past 12 years have been a marvelous experience. It has been a privilege to come to know the Church in Myanmar and to have made a small contribution to its development.