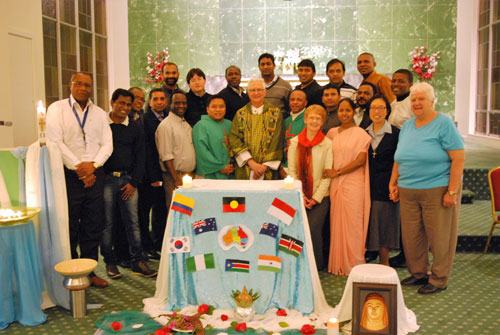 Course attendees included Frs Michael Odiwa, Josy Sebastian, Biju John from the Adelaide Archdiocese and Sr Kaspar Mary from the Port Pirie diocese who, along with their peers, welcomed the opportunity to share stories from their countires of origin and their many and varied ministy experiences.

The 11-day program featured several guest speakers who gave the Australian perspective of ministry. They included Aboriginal elder Mrs Elsie Heiss who spoke about her people and shared her personal story, which created much discussion about Aboriginal culture and history.

The idea for a Winter Acculturation Program grew following the success of the ‘Cross Cultural Summer School’ which was set up by the Sisters of St Joseph of the Sacred Heart and the Columban Fathers about 15 years ago. The summer school assists in preparing people to minister in cultures other than their own.

“As in previous years it was a privilege to journey with these women and men, coming from very different cultures and understandings of Church, as they shared their struggles to understand our Australian culture and Church,” Sr Anne and Fr Brian said.

“We became more aware that in today's multi-ethnic Australian Church we are all called to respond to the gift of this new wave of missionaries with mutual sensitivity to each other's diverse backgrounds.”

Fr Brian Vale SSC works at the Centre for Christian-Muslim Relations at the Columban Mission Institute in Sydney, NSW, Australia.