Helping others be pilgrims for Christ 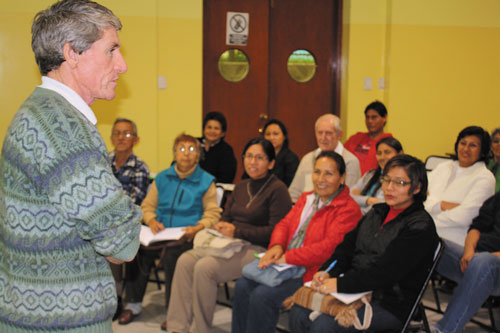 In the mid-1990s the Columbans in Peru were looking for a strategy that might help committed lay people with initiative and leadership skills to think and act beyond their own parish. The invitation to participate in an organization dedicated to sending adults and youth on mission within Peru met with an enthusiastic response. We Columbans were delighted to be able to do a bit more to pass on our missionary emphasis. It was good to see people I knew and with whom I’d worked taking interest in such a mission project.

We believe in and want to do what we can to promote a mature and co-responsible laity in the proclamation of the Gospel in order to help make real the Kingdom of God among us.

This vision continues to be nourished and affirmed by people who are still signing up for our mission program. However, our lay missionaries tend to focus solely on building up the Church and ignore the challenge to transform society, which, according to the Church’s teaching, is the prerogative of the laity.

Even though we have tried to encourage our laity to work at the link between their Christian faith and the issues facing our society, we have had limited success. Maybe this is such a daunting task that most feel that it’s not worth even trying to undertake it. In our preparation courses we constantly strive to open participants to the social issues of Peru. Most would see such matters as important but as the business of government and politicians, with little opportunity for anyone else to do anything about them. 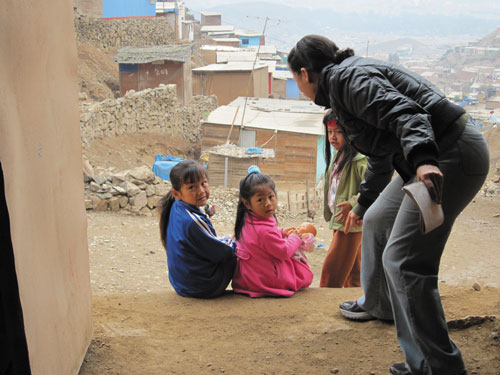 However, there have been a few exceptions. Recently, Isabel, one of our long term missionaries, ran as a candidate in local municipal elections. Another, Aliseo, is committed to a development project with youth and women in his local community. Adela worked on a committee to pave a road in her locality.

There are other frustrations such as missionaries sometimes ceasing to be outgoing. I Instead of going around the barrio knocking on doors when they go to a community, they just sit and wait in the chapel or communal hall. Some promise to do something and then don’t turn up. Perhaps the biggest difficulty stems from home and school formation which has geared most people to reproduce what they have been taught, rather than think and act creatively.

Despite the difficulties we plan to continue to invite people to live an experience of Christian commitment that moves beyond a Church focused project. We want the Church to be for the Kingdom of God not just for itself.

This year one of our priorities has been to encourage our lay missionaries to feel that all of us are members of a community in which we care for each other, get to know each other, reflect and pray together and also celebrate together. We want the community in which the members are seen to love each other to be our prime witness of our faith in Jesus Christ. I can already see this happening in some parishes where our missionaries meet regularly for study and prayer. In other parishes absurd divisions and squabbles can be quite disheartening as there is so much potential good waiting to be unleashed. 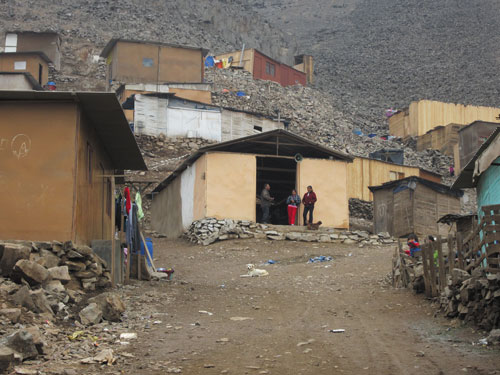 Also, this year there has been a shift in how we organize our principal formation program – the annual five week summer course. Formerly it was open only to those committed to going on mission to some other part of Peru, but now it is open to all active pastoral agents in our parishes. Also, we have made a point of looking for qualified Peruvian laity to lecture and run workshops, giving less prominence to priests and religious. Recently, Pilar helped us with social analysis, Milka with gender issues, Clarisa with psychology, and Walter with planning and organisation.

We no longer have missionaries available to go to places for three or four months, so we have been consulting the receiving parish or diocese to see how we might help out with formation workshops that run for a few days. We still have 50 active missionaries, drawn from eight parishes, three of which are still Columban-run and the rest used to be run by Columbans. About 75% of our missionaries are women.

When asked by Fr. Peter Hughes, a fellow Columban from Ireland who first came to Peru in 1966, how this experience of coordinating and accompanying the Columban lay missionary program within Peru, had enriched me, two things came to mind.

First, I feel certain that at this stage of my life my growth as a person requires the opportunity to be able to work closely with an adult community outside the parish context and this is what my present job explicitly invites me to do. In the parish situation I ended up feeling as though I was just doing jobs as if I were simply a functionary around the place. I would so easily respond to the numerous requests for this and that in the parish and end up without quality time for any particular group of people. In my present job I have ample opportunity for person to person relating and genuinely feel that I do belong to a community.

Second, I feel that this program responds to what we define as Columban mission, because we are preparing and facilitating laity who want to go on mission, and this is my fundamental commitment and interest – to help others be pilgrims for Christ.