No family to grieve at her going

During her final few months of life, Shwe Mya found a home at the Columban Sister’s Home of Hope.

She was a dignified 40-year-old mother of two children; her oldest son had been sent to a Buddhist monastery when he was six-years-old because Shwe Mya was too poor to feed him. The younger small girl lived with  her grandmother whose village was very far away from Myitkyina, Kachin State, Myanmar (Burma). The difficult journey to the HIV clinic would have taken the grandmother at least two days.

Poor Shwe Mya experienced much heartache while she was with us. When she was about two months in our care she received news that her husband had died. A neighbour coming to the clinic gave her the sad news. This was no ordinary news and for weeks her heart was torn and her inner pain and loneliness was tangible. Deep in her heart she knew that she had contracted this HIV/AIDS from her husband and she feared for her future and that of her two children.

Shwe Mya's disease was advanced when she first came to the shelter. She had developed a rare growth on her left wrist which continued to develop in size and ugliness. This weakened and distressed her greatly and she began to fear for what the future of her recovery might be. 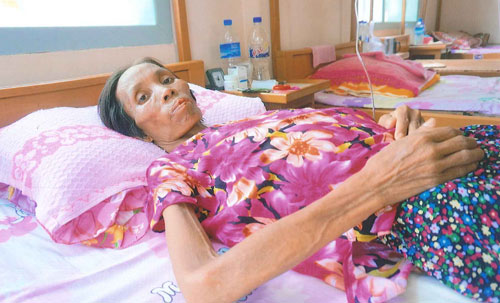 She felt that if she was able to receive Burmese herbal treatment that it might help. The Doctor advised her to contact her relatives and to encourage them to come for a consultation. They, her two younger brothers showed up some days later; they visited with Shwe Mya for a short time and then left assuring her that they would return next morning. Morning came and days followed but they never returned, they never kept their promise. How helpless she felt as we waited these long days. To our great disappointment we discovered that when they left, they had taken her clinic records and her citizen identity card which meant that Shwe Mya could not travel - they abandoned her.

From then on she seemed to lose hope and the rejection she suffered caused her to cry a lot; her will to live diminished; gradually her condition deteriorated and Shwe Mya died in our care two weeks later.

I would like to thank our benefactors who have made it possible for us to care for those like Shwe Mya who have no one to mourn them, no family to grieve at their going.