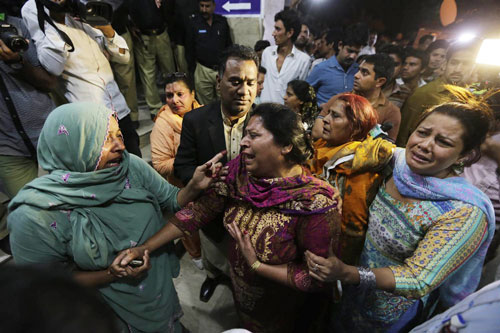 On Easter Sunday this year at about 6:30pm, there was a suicide bomb attack at a popular park in Lahore, Gulshan-i-Iqbal park in Allama Iqbal Town. The park is about one kilometer from the Columban house. The park was particularly crowded, due in part to many Christians out celebrating Easter. Many feel that Christians were the main target of the attack though the District coordination Officer (DCO) of the district government has denied that Christians were the target of the attack.

As of now, the official death toll is given at 70 with about 250 injured, the majority being women and children. The city hospitals were completely over-stretched and an emergency was declared at all government hospitals in the city; there were urgent appeals for people to donate blood.

The attack has been claimed by a group calling themselves Jaamat ul Ahrar, a splinter group of the Pakistan Taliban, the Tehreek-i-Taliban Pakistan (TTP). This is the same group which claimed responsibility for the suicide bomb attacks on two churches in Lahore on March 15, 2015.

The Punjab government announced three days of mourning. The Chief of Army Staff, Gen. Raheel Sharif, chaired a high-level meeting late Sunday night with intelligence and military agents to begin the process of apprehending those responsible, saying these “inhumane savages will not be allowed to overrun our life and liberty”. Prime Minister Nawaz Sharif also chaired a meeting at the PM house, Islamabad, where he was briefed on the Lahore situation by his security staff.

A separate incident earlier in the day in Islamabad, which is likely not unconnected to this attack, is also very worrying. About 10,000 gathered to attend the chelum (40th day after the death) of Mumtaz Qadri, the former Punjab police commando who was hanged last month for assassinating the man he was assigned to protect, Lahore Governor Salman Taseer on Jan 4, 2011. He shot him because of the Governor’s call for reform of the so-called ‘blasphemy law’. About 2,000 of the crowd took the law into their own hands by staging a sit-in within the Capitals Red Zone, near to Parliament house and presented a charter of demands to the government. These include: the implementation of Shariah law in the country, the unconditional release of all Sunni clerics and leaders booked on various charges including murder and terrorism, the declaring of Qadri as a martyr and the execution of blasphemy accused Christian woman, Aasia Bibi, the woman Governor Salman Taseer was killed for defending.

This is another dark day for Pakistan, where the security situation now seems out of control and people are forced to live in an atmosphere of fear, with no real hope of any change. The message of Easter is hard to keep alive in such a situation.