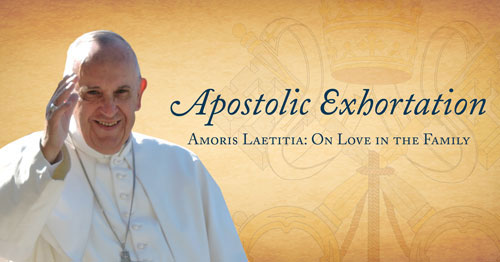 The thing I found most challenging about Pope Francis’ first Exhortation,Evangelii Gaudium (EG), was his insistence on a discerning, decentralised and consultative church. He expressed his confidence in local bishops (EG16) and Episcopal Conferences (EG32) and spoke of a desire for a profound decentralisation and for Christian communities to come up with solutions “proper to their own country” (EG186).  I was surprised because, with the possible exception of Pope Paul VI in Octogesima Adveniens, I had never heard of a Pope who encouraged countries to come up with their own local solutions.

I thought the strength of the Catholic Church was that it was universal and uniform across the whole world. I also believed that building such a discerning and consultative church would demand a new level of faith, greater courage, deeper spirituality and new structures if we are to learn to discern for ourselves after decades of waiting for Rome to speak.

Now in his Post-Synodal Apostolic Exhortation: Amoris Laetitia, Pope Francis has extended his demand for a discerning, decentralised and consultative church into the area of the family. Amoris Laetitia is a call to all in the church to consider the complexities of peoples’ lives and to respect their consciences. The Pope continues to proclaim the church’s teaching on marriage but consistent with his principle from Evangelii Gaudium that reality is greater than theory, he constantly asks us to consider the “concrete situations and practical possibilities of real families” (AL36). People should not be “pigeonholed or fit into some overly rigid classifications leaving no room for personal and pastoral discernment,” (AL298). No law can cover every eventuality or apply in the same way to every circumstance. People are called to discern what God is asking of them in this situation and what is the most generous response they can make to God (AL302/3).

This will require a great change for the Church and especially for us priests and bishops. Pope Francis asks the church not to impose rules by sheer authority (AL35); to be humble and realistic, with a healthy dose of self-criticism (AL36); we are not to waste pastoral energy on denouncing a decadent world without being proactive in proposing ways of finding true happiness (AL38) and above all we are “called to form consciences, not replace them” (AL37).

Pastors are to: 1) understand the difficulties people face; 2) offer spiritual nourishment, encouragement and a positive vision; and 3) form consciences and help people to discern. This will be a new, demanding but exciting challenge for most pastors as it is not something we have been encouraged or trained to do.

Pope Francis is clearly confident that we can trust the consciences of the faithful. God wants to help us all make good decisions. The Pope shows his confidence by assuring us that “not all discussions of doctrinal, moral or pastoral issues need to be settled by interventions of the magisterium”. (AL3)  He appreciates that the future depends on the laity and how they grow into maturity and take responsibility for their own spiritual lives.

A word that Pope Francis uses frequently in the encyclical is “maturity” (about 20 times). He hopes that the practice of discernment will help us all grow in personal maturity, the ability to make faith decisions and a mature friendship with Christ. The church that Pope Francis wants will clearly demand that we all learn to live as adults, taking responsibility for our decisions and learning to live with the uncertainty and sometimes the confusion that is often a part of discernment. He wants us not to be frightened of weakness. He mentions the word “weakness” (15 times) in the encyclical and sincerely believes "that Jesus wants a Church attentive to the goodness which the Holy Spirit sows in the midst of human weakness" (AL308).

If we can achieve this level of discipleship we will clearly be a different church, a more adult, discerning, decentralised and consultative church.