There are many things about Pope Francis that are exciting and affirming: his leadership style, his positive and beautiful message and his call to mercy, but there are other aspects which trouble me. These things mainly revolve around his call for us to draw near to the poor because “they have much to teach us. We need to let ourselves be evangelised by them.”  (Evangelii Gaudium 198)

I come from a working class family and the parish I attended as a boy would not have talked of “the poor” as if they were alien. We were not far removed from them ourselves. But life and education have removed me and most of my contemporaries from that situation. Education has made us middleclass in lifestyle, interests and recreation and I suspect that we are not aware enough of what power and prosperity are doing to us. In the gospels they were the things that Jesus warned most stifle the spirit and make us insensitive to weakness and failure. So Pope Francis’ invitation for us to draw near to the poor is important not only for the poor but for our own salvation. 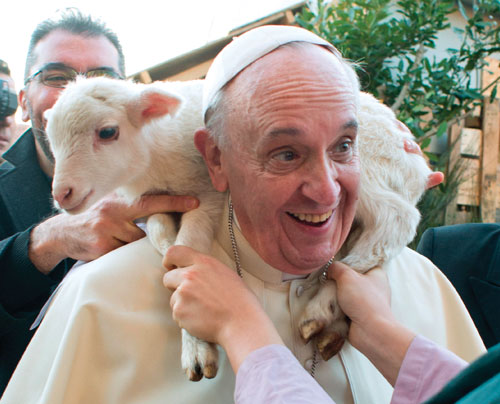 In Laudato Si'  Pope Francis reminds us that we often sustain our lifestyle, our economy, our politics by excluding people from our minds our calculations. “Almost without being aware of it, we end up being incapable of feeling compassion at the outcry of the poor, weeping for other people’s pain, and feeling a need to help them, as though all this were someone else’s responsibility and not our own. The culture of prosperity deadens us…” (LS 54)

Pope Francis invites us to draw close to and know the names and faces of the poor. But I find that “the poor” embarrass and unsettle me. They unmask my idolatries; they reveal my lack of responsibility; and they often make me aware of the shallowness of my life. We, “powerful people”, believe in the present order of things so when we say we are opting for the poor, we are opting against ourselves and the current order which has benefited us and in which we have so much invested.

Last year I read Pope Francis’ Address to the Popular Movements given in Santa Cruz de la Sierra, Bolivia. It is a radical speech challenging all the political realities that I, as a pragmatist, have come to accept. He starts with “Let us begin by acknowledging that change is needed. Do we realize that something is wrong in a world where there are so many farmworkers without land, so many families without a home, so many labourers without rights, so many persons whose dignity is not respected? So let’s not be afraid to say it: we need change; we want change.” This is a call to action way beyond what most of us would believe is politically achievable. I wonder at the wisdom of such a call. No politicians will be arguing that way when our federal election comes around, but perhaps we Christians have to be more radical and prophetic than we find comfortable.

He goes on to tell the poor members of the Popular Movements, “You, the lowly, the exploited, the poor and underprivileged, can do, and are doing, a lot. I would even say that the future of humanity is in great measure in your own hands… Don’t lose heart!” The "professionalism" in me makes me respect the successful and rely on the efficient. Consequently I tend to devalue the weak, the poor, the old, the abandoned, the odd and the dreamers. I appreciate power, organisation, technology, and look to these areas for solutions. Yet Pope Francis is suggesting that it will be the poor and not the powerful politicians who will solve the world’s problems and he goes on to question how much technology can help us solve the problems of ecological degradation and poverty. To some extent they perpetuate the problems they have caused. They will not work without the involvement of the poor.

We need to have the “smell of the sheep” to know their faces and names because our salvation and not just theirs, depends on this. So does the future of humanity and the universe.'