‘Malizup Women Weavers’ (MWW) began in February 2008. Malizup means the “confluence” which simply refers to the meeting place of Nmai and Mali rivers which together form the famous Ayarwaddy (Irrawaddy) river.  It is situated 27 miles from Myitkyina.

My sister Columban Sr Mary Ita organized this small group of local Jinghpaw women - a Kachin tribe from the Northern Province of the Kachin State living in Myitkyina, to form the Malizup Women Weavers.

Weaving is the special skill of the Jinghpaw people, which even today deeply influences their way of life in a world which is changing and moving forward to much more advanced ways of production of goods.

The Malizup Women Weavers are happy and determined to share their beautiful and unique culture and tradition which they have inherited from their parents. Each pattern has its own distinctive meaning. Some demonstrate the close relationship of the Kachin people with nature e.g. flowers, birds and animals, while other patterns express some part of their story and tradition.

The MWW are believed to be the first group among the Kachin Catholic Community to have come together and united as one with great commitment and enthusiasm in the production of the Jinghpaw textiles.

Weaver Lu Jan 62, says “I joined the MWW in 2008, and I am very proud to be part of this group”. Mrs Lu Jan, who produces six small bags a week, learned this tradition and skill from her mother at 10 years of age. As well as the six small bags, she usually weaves three beautiful shawls each week on her back strap loom at home.

With a big smile she said, “Now I realize that this small step not only promotes my own tradition, but with my own skills I also earn extra money to support my family”.

Generally Kachin people proudly wear their traditional dress for special occasions such as weddings, traditional festivals and religious celebrations. Today, most of our young people prefer contemporary designs and styles.

Teresa Kareng, Manager of MWW said, “Most of our customers are not only local but also from Yangon and other distant areas, such as London and Beijing. Customer service is very convenient because customers can order our products by phone or email.”

Daw Doi Bu, one of the MWW members was very emotional and said with a smile “I am so happy and proud to find other people appreciate and value our work.” Mrs Bu is a middle aged mother who has many children. With her sparkling eyes, she continued, “I do not need to go away from my home and my children. It is a great opportunity to have a job at home and can support my family with extra money.” 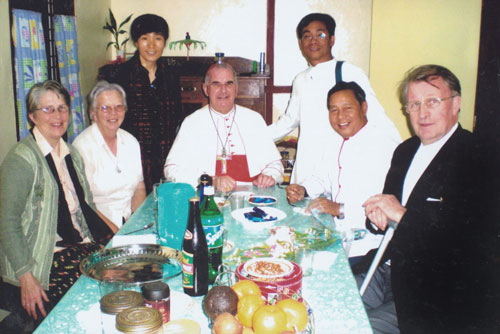 Of course, most Kachin women are housekeepers and busy with their household tasks.  So they usually have to depend on their husband’s income alone.

Weaver Daw Ndawng Kaw, 65, said, “I can work indoor and earn extra money to support my family. By weaving I can support my son financially which has allowed him to graduate from university." Mrs Kaw learned this weaving on a back strap loom from her mother since her parents believed a girl must know how to weave clothes while she is very young.

But Mrs Jan who is one of the pioneer members of MWW worried about the future of Kachin hand loom weaving and said, “if our young women do not learn this tradition and custom of Kachin loom weaving from us, we might lose our heritage”.

By producing textiles with new patterns and which follow contemporary styles, the MWW today are trying to encourage and nurture Kachin young women towards treasuring their own identity as well as  learning their traditions and customs. Modern Kachins prefer mechanical looms, but they also need to preserve their own identities and the traditional hand done weaving on back strap looms.

Finally Mrs Jan gives advice to those who want to learn this kind of traditional weaving by saying, “It is a prerequisite that a handloom weaver must be patient and have a peaceful heart because she has to deal with cotton and wool after all”.

The Woman Association president Teresa Khon said, “The success of this enterprise depends on each of the members taking responsibility for her own work as well as for the success of the entire project. We emphasize quality production rather than a large quantity of under-standard material.”

She continued, “We hope this undertaking will also inspire our young people to appreciate and respect the beauty of our culture and tradition, which expresses the wonderful heritage of Kachin identity.”