Walking around the camp 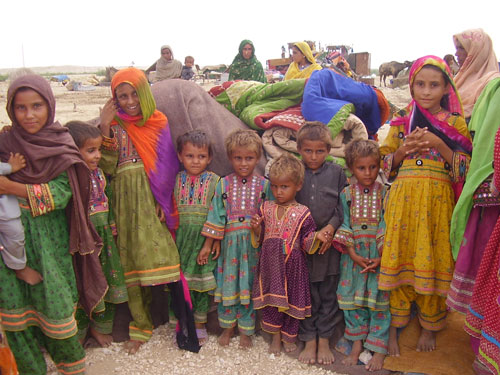 Many years ago, I came across a verse in the Book of Proverbs which has stayed with me ever since - and it will probably resonate with many in the harsh economic times in which we live - it simply says “give me neither poverty nor riches; feed me with the food that I need.” (Prov 30: 8-9)

This verse leapt to mind as together with Columban Sr Rebecca Conlon we walked around a camp talking to the women and children and taking in, yet again, the picture of absolute poverty in which they were living their lives.

Some tents held a massive or medium sized light metal trunk in which all the family’s earthly possessions were stored to keep them as dust-free and insect-free as possible. On top of this were piled mattresses and bundles of clothes. A few had plastic sheeting on the ground but equally as many had nothing more than the stony desert floor. Some, but not all, had one metal or wooden framed - rope strung - double bed most of which were sagging and showing drastic signs of wear and tear. With families numbering six to 16 per tent we couldn’t help asking the question - "where does everybody sleep?"

It's one thing sleeping on a mattress on the floor of one’s own home and another to lie on the open desert floor where snakes, scorpions, lizards and other creatures of the night live! As the cold desert nights set in we saw the need to get each family ‘charpois’ (stringed beds).

A group of women then led us to a tent where such a bed was to be found but on this one lay a tiny woman whose face was covered by her veil, to keep away the flies. Removing the veil we saw the serene but wizened face of a woman who was obviously very close to death - it was both a shock and a stark reminder of the fragile hold we have on life.

We sat quietly with her for awhile, imbibing something of the mystery of her acceptance of the reality of both life and death.  Praying that she would pass gently to the God she believed in. The women accompanying us told us that this lady was in her 50s but I would have put her between 70 and 80. 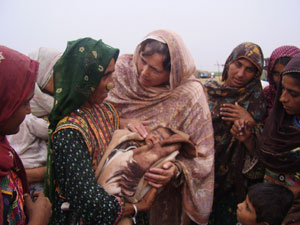 Has poverty and hunger - spread over a life time - shortened her life is the question that came from within me.

The men in our team that accompanied us to the camp got on with the essential heavy work of distributing sacks of flour, each weighing over 30kg. They have the hard task of maintaining order among the milling hands stretching out towards them, and ensuring that each family receives its fair share. But nowadays they are more patient as even the last know they will get the same as the first.