‘We are the miracle girls!’ 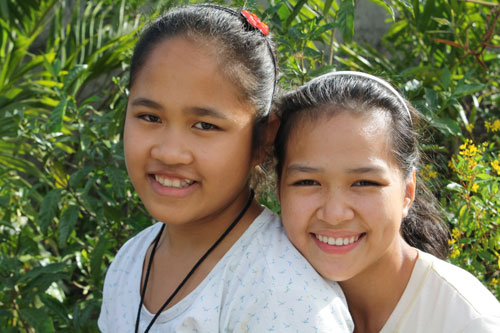 ‘You won’t laugh at me, will you?’ asked 11-year-old Lourdes (not her real name), just before she got up to sing at a programme in Holy Family Home, Cabug, Bacolod City, Philippines. It was the feast of the Holy Family and I had been invited by Sr Letty Sarrain, a Panamanian Capuchin Tertiary Sister of the Holy Family, to celebrate Mass.

When Lourdes sang I was astonished at the purity and clarity of her soprano voice which made me think of medieval cathedrals. I was touched too by the utter trust of her question, even though she had never met me before. I learned later that she had had a particularly bad experience with an older male member of her family.
Most of the girls live in Holy Family Home, just outside the city but the girls taking third-level education live in another house near the city centre, under the supervision of a house-mother.

Nearly all the girls have been referred to the Sisters by social workers in the cities and towns of Negros Occidental. Most have had experiences similar to that of Lourdes though some come simply from a background of poverty. 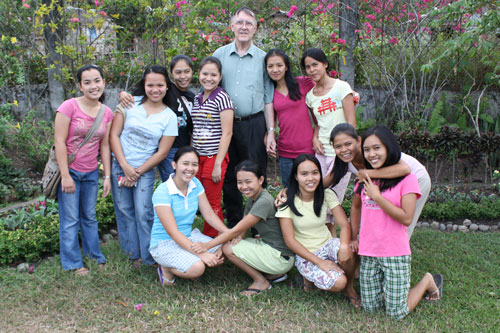 At first I used to visit once or twice a month, usually on a Sunday afternoon, then I found myself celebrating Mass fairly regularly until I did so almost every Sunday and on special occasions.

When I had come to know the Sisters and the girls better, I decided to bring the graduates and the honours students to a popular family restaurant for a meal.  I’ve made this a yearly practice, going to different.

I hardly ever ask any of the girls about their situation. They get professional care for that. Sometimes one of them tells me that she has a court hearing coming up and asks me to pray for her. I get angry when I learn that a hearing has been postponed, as so often happens, because one or other lawyer or the judge hasn’t turned up. I see this as a continuation of the abuse. 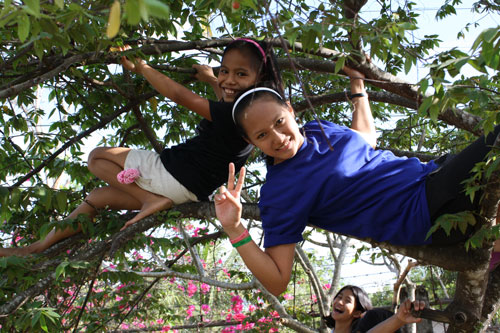 The girls know that I’m aware of their background as I often refer to it in my homilies. Even more often, I let them know how I see them welcoming a new girl and helping her through her initial difficulties.

Each year we combine the celebration of the feasts of St Agnes, January 21 and Blessed Laura Vicuña, January 22. Blessed Laura was born in Chile in 1891 and died in Argentina a few months short of her 13th birthday, having offered her life for the conversion of her widowed mother who was living with a man who tried a number of times to abuse Laura. St Agnes of Rome was born and died exactly 1,600 years before Blessed Laura and is the patron of rape victims. We also celebrate the feast of St Maria Goretti on July 6.

The girls in Holy Family Home have brought great joy into my life. I’m aware too that for some, when they eventually leave Holy Family Home, it’s not a question of ‘And she lived happily ever after’. I see so many who have been healed, who have learnt to forgive, who have lived in a loving environment, who have been enabled to go to school when otherwise they would never have the chance.

On the first Saturday of each month the Sisters have a two-hour vigil before the Blessed Sacrament for vocations to their congregation. The girls are invited to join this and most attend, though the younger ones usually leave early before they fall asleep. The prayers of both the girls and the Sisters are being heard. One day one of them came over to me and said, ‘We are the miracle girls!’

‘The miracle girls’ have brought great joy into my life and vocation. They enjoy coming to my house or going to a restaurant, enjoy the ice-cream, but above all they have welcomed me into their lives and trust in my vocation and that I am there with them on their journeys through life.

Columban Fr Sean Coyle is Editor of Misyon magazine in the Philippines.