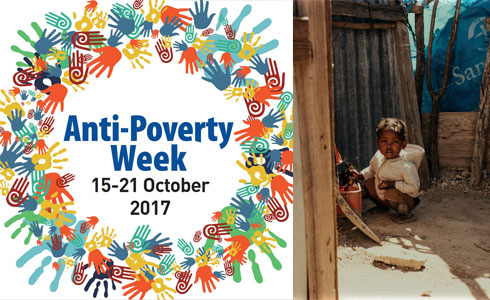 October 15-21 was anti-poverty week, coinciding with the United Nations International Day for the Eradication of Poverty which is on October 17.  This year also marks the 30th anniversary of the Call to Action by the French priest Fr. Joseph Wresinski which inspired the observance of October 17 as the World Day for Overcoming Extreme Poverty.

Fr. Wresinski was born to immigrant parents in a poor neighbourhood of Angers, France.  His family suffered from great poverty and social exclusion.  After his ordination in 1946 he served in poor communities where he related to the most disadvantaged families. He later founded a research institute on extreme poverty. His firm purpose was to unite all people in society around those living in extreme poverty. In 1979 he was appointed to France’s Economic and Social Council. With the publication of the Wresinski Report in 1987, he succeeded in gaining recognition of those in extreme poverty as partners in society.

On 17th October 1987, in the presence of 100,000 people from every social background, Fr Wresinski unveiled a commemorative stone in the Human Rights Plaza in Paris.  On this stone his call is engraved: “Wherever men and women are condemned to live in extreme poverty, human rights are violated. To come together to ensure that these rights be respected is our solemn duty.”

The International Day for the Eradication of Poverty and its antecedent, the World Day for Overcoming Extreme Poverty “represent an opportunity to acknowledge the efforts and struggle of people living in poverty, a chance for them to make their concerns heard and a moment to recognize that poor people are in the forefront in the fight against poverty.” (UN Report of the Secretary General).

Pope Francis in his speech to the United Nations Food and Agriculture Organization (FAO) in Rome to celebrate World Food Day on 16th October, said “it is clear that wars and climate change lead to hunger, so we must stop treating it as an incurable disease.”  “For some it would be enough to reduce the number of mouths to feed and in this way solve the problem.  Reducing is easy; sharing instead demands conversion, and this is imperative.”  “To love”, says Francis “means to contribute so that every country increases its production and reaches food self-sufficiency.  To love translates into thinking of new models of development and consumption, and adopting policies that do not aggravate the situation of the less advanced populations, or their external dependency. To love means not continuing to divide the human family into those who have more than they need, and those who lack the essential.”

In 2016 world hunger once again increased. Now there are 800 million men, women and children who are hungry, 11 out of every 100 people on the planet.  “We cannot act only if others do, nor limit ourselves to pity, because pity is limited to emergency aid, while love inspires justice,” Pope Francis said.

Columban Fr Peter O’Neill is the Peace, Ecology and Justice Co-ordinator for the Australia/New Zealand Region.  He returned to Australia this year after working in Taiwan for 26 years with the poor and abused migrant workers.