Because He Loved the Eucharist 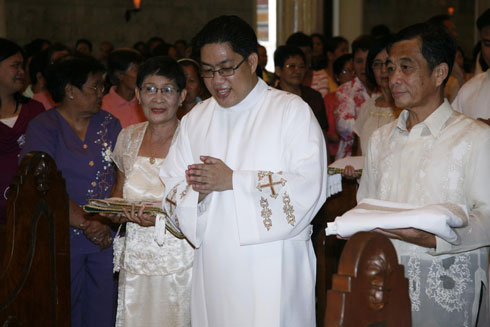 I can compare the life of my father to the Eucharist, a testimony of love and sacrifice. ‘If the Lord wants to take me, I am ready to go.’  This was the answer he would give every time we would ask him to take care of his health. I remember the first time he said this to me directly. I had been a priest for one year and assigned as parochial vicar in St Mary Magdalene Parish, Hinigaran. My father was president of the Adoracion Nocturna Filipina (ANF), a church-based lay organization of men who devote themselves to prayer and adoration of the Blessed Sacrament.  As president, Tatay asked that the ANF’s annual diocesan-wide vigil in honor of the Blessed Mother be held in the parish where I was assigned.

Around 200 men gathered in our parish and the activity started with a procession around the town. In the middle of their procession it started to rain heavily. Nevertheless, they continued and arrived at the church soaked to the skin. We provided towels and some clothes but not enough for all. My main concern was for my father because I knew that he wasn’t in the best of health. He was just in his second year of retirement after having a heart operation and prone to catching a cold in this kind of situation. 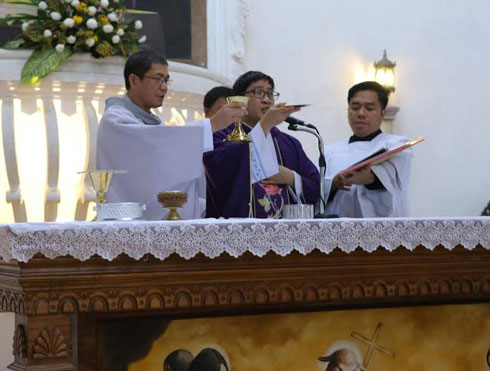 True to his nature, he gave all the towels and dry clothes to his companions first. I was asking him to also take care of himself but he insisted on making sure that the others were dry before looking after himself. In exasperation, I scolded him for not taking care of his health. That was when he told me that what he was doing was for God and that if it was His will, he was ready to die. I had studied the courageous lives of martyrs and saints and in that moment of heated conversation I realized that I was getting a first-hand experience of how one lives that courage.

Tatay knew that he had frail health but he trusted that God would give him the strength to continue in His service for as long as it pleased Him. Intellectually I could understand and even admire this expression of his faith but it was hard for our family, especially for my mother, who had to take care of him.

In a little more than a year after that incident Tatay’s liver failed him and he had to undergo hemodialysis twice a week. His increasingly worsening condition eventually forced him to step down from his position as president of the ANF and from his other church roles, including his work as an Extraordinary Minister of Holy Communion. Despite his failing health, Tatay didn’t want to just rest and relax because he believed that whatever remaining time he would be given here on earth should be passionately spent for God and for others. Even in hospital his visitors would receive what my mother called ‘seminars’ because he still had a lot of advice and admonitions to give to those who would listen.

Tatay’s final days were difficult for him.  With only the two us in his hospital room, in the middle of the night, he would whisper to God that he was ready anytime that God would be pleased to take him. I knew that in those moments he was suffering in great pain and that I was witnessing how it is to unite one’s suffering to the sacrifice of Jesus on the Cross. What I saw in my father’s last days was his close personal relationship with Jesus in the Eucharist whom he loved so much.  I remember him telling me that his love for the Eucharist started when he was still a teen, when he would also join the ANF vigils in his home parish of Sta Barbara, Iloilo.

I have come to appreciate that one of the most important values that he instilled in me and my siblings, from the time we were children, was our love for God and His church, especially love and devotion for the Eucharist. Indeed, this was a significant factor in my vocation story as a priest.

Tatay died on 26 August 2015. Until now, a few people have observed that our family didn’t seem to be particularly saddened by his passing.  My mother would tell people, ‘How can we be sad when Tatay is finally at rest with His beloved Creator?’ This is the peace that our faith gives us.  We have the assurance that death is mere passage to new life. We not only hope, we firmly believe, that Tatay is with God, still with us and still watching over us, and that he is only waiting for us to join him in heavenly glory of eternal life.

Every time I raise the Holy Host during the Consecration, a wonderful privilege for every priest, I am called to a deeper devotion to the Sacrificial Lamb, the Lord who loves me unconditionally. And it brings me to pray that I may love Him more and more each day as did Tatay whom He had graced all those years.

The author, Fr Dominic Derramas is a priest of the Diocese of Bacolod, which includes Bacolod City and the central part of Negros Occidental from Victorias City in the north to Hinigaran in the south. He is from Our Lady of Peace and Good Voyage Parish, Airport Subdivision, Bacolod City.