Columban Missionaries on the opening of COP23, Bonn, Germany. 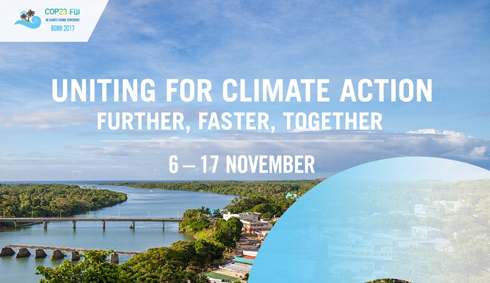 Columban General Council on the opening of the United Nations’ COP23 presided by Fiji and hosted  in Bonn, Germany, wishes to send a message urging all leaders to take meaningful action on advancing the agreements made at COP21 in Paris and COP 22 in Marrakesh. Columbans have been present in Fiji for more than 60 years and know intimately the impacts of climate change on small island states in the Pacific.

In a statement on the tragedy of Cyclone Winston in 2016, Columban Superior General, Fr. Kevin O’Neill said, “Our hearts ache for the suffering caused by Cyclone Winston.  The images of human and environmental devastation urge responses of aid, mercy, compassion, love, and solidarity.  On behalf of Columbans around the world, we extend our deepest condolences for all who have lost their lives, and for strength and courage in the rescue and recovery ahead.”

Columbans join with our sisters and brothers of other faiths in endorsing the COP23 Interfaith Statement which says, “We look forward to creating a global community of conscience and practice in which we learn to put belief into action in relation to our own lifestyles. We wish to be clear that we understand that systemic change is required to solve this crisis.  We will continue to advocate for the policies that are so urgently needed.”

Pope Francis in his 2017 World Day of Prayer for Creation said, “The relationship between poverty and fragility of the planet requires another way of managing the economy and measuring progress, conceiving of a new way of life because we need a change that unites us all.”

On behalf of Columbans worldwide who see intimately the devastating impacts of climate change on both the human and non-human world, we offer our prayers especially for the people of Fiji and other small island nations as well the world leaders who have gathered in Bonn, that meaningful action will be taken to keep a commitment to the 1.5 degree threshold agreed to in Paris.

Columbans also commit to individual and institutional lifestyle changes and policies that are in keeping with reducing our harmful environmental impact and growing in our reconciliation with all of God’s Creation.

Fiji and Pacific Island are faced immediately with the climate refugee crisis.  Therefore, in closing, we offer this prayer from Global Catholic Climate Movement, of which Columbans are founding members.

We pray that refugees from the climate crisis find peace and Fijian “Bula vinaka,”or a spirit of welcome, in their new homes.  We pray that migration policies include climate refugees among those who need special consideration.