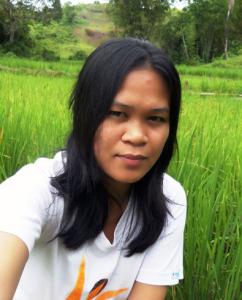 The conflict between the Philippine Military and the Islamic State/Maute terrorists continues in Marawi City.

The Subanens held hostage there are being disguised by their captors to look like IS fighters. The Columbans continue to help the refugees from Marawi through their Muslim contacts in the Inter-religious forum group. The following is our latest update about the situation facing the hostages.

The Operations Manager of Subanen Crafts, (a Columban run project) Mercy Gawason, and Rosalyn Patihan, a Subanen crafter, went to Midsalip on Thursday July 13, 2017 to see what further information they could gather about the missing and captive Subanens in Marawi. Mercy and Rosalyn have relatives are among the missing.

Mercy and Rosalyn gathered as many names as they could of the missing Subanens from various barrios of Midsalip but were not able to get much detailed information about each name. To get specific information they needed to talk to the parents and close relatives of each of the missing individuals but they did not have the time to do so. However, they were able to gather some specific details regarding those missing from the Rosalyn’s barrio of Sigapud.

We sent the names and the bio-data of the missing Subanens to Lyra Verzosa who is a consultant for the Regional Human Rights Commission in the Marawi area. This commission will present the information to the Military and government officials which may be used to verify that the captive Subanens are not Maute  members (a militant group).

The situation of the captives is very serious as the Maute terrorists are making the hostages look like and act like Maute fighters. This will lead the army to believe that the captured Subanens are also Maute thugs.

Delvert Macatulag, one of the captives from barrio Sigapud, recently escaped from the Maute and surrendered to the Army in Marawi. His story describes what is happening to the Subanen captives;

He called his mother in Sigapod from Cagayan de Oro using a cell phone borrowed from the police. In that conversation Dilvert told his mother that the Subanen captives have been tattooed with the mark of Isis and forced to wear masks like the Maute and are even issued guns.

The captives will be will be killed along with the real Maute terrorists if the Army attacks. It seems that the only way a captive can avoid being killed in the conflict is to risk escaping from the Maute and then hope they can safely surrender to the Army.  But not all captives can take that risk because members of their family held hostage will be harmed.

Columban Fr Vincent Busch has been a missionary in the Philippines since 1974. He currently works with the Subanen people of Mindanao, Philippines.