“Houses of Horror” is how one visitor described the centres where children are held illegally behind bars or in cages.

Senior Philippine officials responsible for the protection of Filipino children at risk made spot inspections of four child detention centres around Manila following a series of negative reports in the foreign media. The officials representing various government agencies were shocked and greatly disturbed when they saw the terrible conditions of the jailed children behind bars in these detention centres run by local government agencies. The national government has limited jurisdiction over them.

In one centre children are held in these conditions from three months to over one year and nine months. The cells for boys are overcrowded. In another detention centre there is only one social worker to handle the 43 cases. In three centres the children were in prison cells behind bars. In one jail a child looked as young as six years old.

The fact-finding teams saw that the children suffered 24 hours of confinement with no sunlight exposure. There was bad ventilation and dirty toilets and the smell of urine pervaded the place. The investigators asked for the case studies and social workers’ reports, files or records of the children. There were hardly any! Many children were unidentified and without birth certificates and no effort had been taken to find parents or relatives. One child was found to be eight years old.

The government spot inspections were made over a period of two days. They saw the abusive conditions of dirty, smelly toilets, young boys and girls mixed with older youth, wearing dirty clothes, unwashed and caged behind steel bars and others like criminals in rooms like mesh cages. 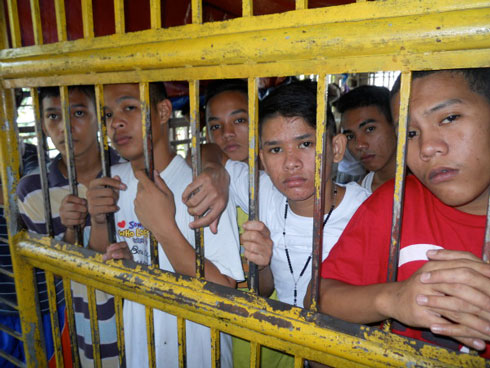 They saw children lying and sleeping on concrete floors. Most centres were lacking beds, sleeping mats and mosquito nets. Food was eaten sitting on the floor.

The floors and walls were dirty and one was covered with graffiti. There were no programmes for psychological healing, therapy, education, physical exercise, games, books or any mental stimulation. Some children have been sexually abused by the older youth in the detention centres. One girl was sexually assaulted in the Marikina youth centre by a male guard.  A criminal case is now in court but this guard still works at the centre and has control over the other children. How can it be allowed to happen?

Young girls who are victims of serious crimes such as sexual abuse, exploitation and human trafficking are locked up in centres all over Manila and elsewhere as if they were criminals instead of victims. They are easy prey for guards and police to be sexually exploited again.

The girls held in separate cells receive no therapy or healing. Many are returned to their pimps and abusers since the sex industry is tolerated and sex bars and brothels are permitted to operate with a city permit signed by the mayor.

The fact-finding team was made up of senior representatives of a  number of social welfare agencies including the PREDA Foundation which was founded by Columban Fr Shay Cullen in 1974. The PREDA Foundation promotes the human rights and dignity of the Filipino people, especially women and children. Its main focus is to assist sexually exploited and abused children. PREDA stands for “People’s Recovery Empowerment Development Assistance.”

Fr Shay Cullen SSC, founder of PREDA, has spent more than 40 years in the Philippines