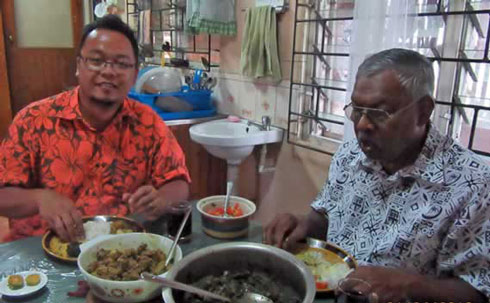 "Abba, call me that," my host father responded when I asked him how I should call him. Abba is the Hindi (Indian) word for father. Sam Daniel would be my third host-father in Fiji. He is Anglican and lives with his wife near their church. They have a son, Roneel, who is now an Anglican priest himself. Abba works as the school manager of the Anglican church-run schools in Labasa. He would wake up early in the morning to feed the chickens. After eating breakfast, he would drive me to the Catholic church for my Hindi lessons, and he would report to school. In the afternoon, we would then meet at a small shop near the school and have small talk with his friends. In the evening some of the neighbors would come over, and we would have a game of cards and a big bowl of kava.

I attended Anglican services together with the family. What I enjoyed most is the singing of worship hymns at the beginning of the liturgy, so I would sit together with the musicians and sing my heart out. Abba loves his Indian TV drama series. We would watch together in the evening just before sleeping. I lived with them for almost a month before moving to the parish.

Homestay is an important component as a student missionary. In order to learn the language and culture of the country we are sent to, the best way is to live with a family for a week to as long as six months. Like Indians, Filipinos never call their elders by their first names. So the first thing I did is to familiarize my relationship to people around me as they are related to me being the "son" of the family I am living with. During my stay in Fiji, I lived with three families during different stages of my assignment in Fiji.

The first family I lived with during my first six months in Fiji was with Ignatius Balkisun (Bale) and Pauline Rosy. They have two daughters, Bernie, a dentist, and Pat, a teacher. Pat and her husband lived with the couple while Bernie lived on her own in Suva. Most of the day I was left alone with Uncle Bale and Auntie Pauline. The family belongs to the Nadera Mandali group, which is the equivalent of the small Christian community. Families would take turns hosting the Friday prayer meetings. I would accompany the couple as they attend these prayer meetings, and on Sunday we went to church together. 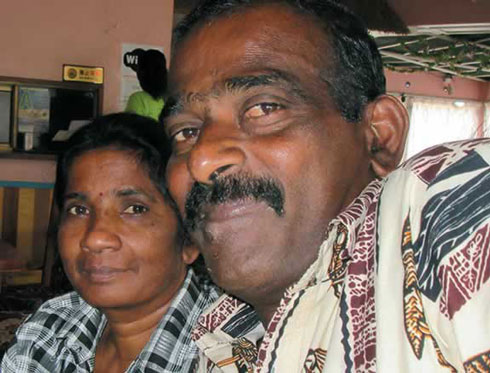 After six months of urban exposure in Suva, I moved to the northern island of Vanua Levu. For my rural exposure, I came to live with the Reddy family in the hills of Naleba, Labasa. The couple, Sanmogan Reddy and his wife Mary, have three children, all teachers now. I stayed with them for most of the time I spent on the island. I was introduced as a son of the family and so in the village, I related to everyone either as their nephew, grandchild or uncle. And I had to learn every name to call them ajja-ajji (grandparents), mama-mami (uncle-aunt), etc. We did many things together. He introduced me to many of his friends - not only Catholics but the Hindu and Muslim neighbors. I had a great and interesting time in Naleba. On the last few days when I was about to leave them, I noticed he was very quiet and seldom spoke to me. The moment I was about to go and get in the car, he embraced me tightly and sobbed. It felt great to be considered a son.