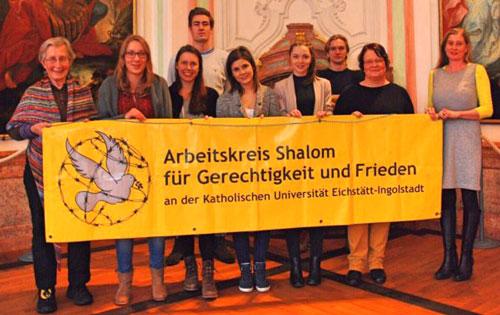 The famous Shalom award by the working group (AK) Shalom – For Justice and Peace at the Catholic University of Eichstätt-Ingolstadt is given to Columban Fr Shay Cullen and the PREDA Foundation Inc. The prize has been awarded since 1982 to extraordinary commitment in the field of peace and human rights.

This year the prize has been awarded to the PREDA Foundation Inc. in the person of Fr Shay Cullen, 73, a Columban Missionary from Ireland who has worked justice and peace in the Philippines since 1969.

The Prize is awarded for the work of 54 staff, social workers, therapists, administrators and public educators in defending human rights and the work for Peace. PREDA is active in caring for the rescue of abused children from jails, abusers and brothels and giving the victims of abuse a safe home with: protection,education,values formation,affirmation, empowerment and healing therapy and restoring the self-esteem of the victims of abuse and violence. It takes legal action against child abusers and campaigns for the rights of the child through main street media and the social media.

PREDA believes that many acts of violence, conflict, war, begins with individuals who have been victimized as children. They may have being victims of violence in words, punishment, by rejection, unwanted and or physical or sexually abused. Some of these young people carry the urge and tendency to violence and anger-release buried within their psych.

Later in life a few may vent their buried anger or misunderstandings or false perceptions of reality on society, family or community. Some can create a cycle of violence designed to overpower others and they express feelings of revenge and vengeance. This is the effect of childhood violence and neglect.

The PREDA healing process is through dialogue, positive relationships, community education through participation. PREDA strives to create a community that listens and learns from victims and gives support and encouragement and healing to victims of violence and abuse.

The prize will be awarded on May 4, 2017 in Catholic University of Eichstätt-Ingolstadt.

Click here for more information on the work of PREDA