The famous Shalom Award for Human Rights defenders has been presented to the PREDA Foundation, in the Philippines through Columban Fr Shay Cullen by Ulrike Schurr chairperson of the Justice and Peace group of the Catholic University Eichstaett-Ingolstadt. She said that the award was richly deserved because of the international impact of the work of PREDA and Fr Shay Cullen.

The conferring ceremony was held on May 6, 2017 in the University Grand hall and was attended by the leading civic and church personalities and the representative of the president of the University.

Ulrike Thoenniges president of Tatort-verein Foundation based in Cologne gave The Laudation or introduction to the work of PREDA. She outlined in her speech the important work of the PREDA Foundation and Columban Missioner Fr Shay Cullen and his PREDA team defending human rights in the Philippines. She said the extraordinary work for the past 43 has been consistent and unrelenting in commitment and dedication. 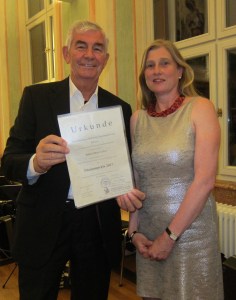 It was a very important work that was an inspiration to the world and greatly deserved the Shalom Award. It is a work that is on going, she said, and consisted of rescuing children illegal detained in jails and saving victims of human trafficking. The children, she said, are rescued from sexual predators and sex tourists and their abusers. The work gives the children shelter and healing therapy and reintegration.

In his acceptance speech Fr Shay Cullen said he accepted it on behalf of those who worked on his team for human rights and protecting and healing the victims of human trafficking, abused children and young women.

He accepted he said not for himself, but for the victims of oppression, human rights violations, and every kind of abuse. He called on every one to take a strong stand for the human dignity and rights and never to remain silent when there are abuses in the community.

The distinguished audience of professors of academia, students, civic leaders and Fair traders and the general public present gave a sustained applause in acknowledgement of the achievements and accomplishments of the PREDA Foundation in defending and promoting human rights.

Columban Fr Shay Cullen is set to receive another prestigious international award in recognition of his work against child sexual abuse and sex trafficking.

In November, the missionary, who is based in the Philippines, will receive the 2017 Martin Buber Award.

The honor recognises his work, through the PREDA Foundation, helping children and women.

He will be presented with the award in Kerkrade during the annual International Festival of Dialogue – EURIADE.

According to Matt Moran, author of the recent book, The Legacy of Irish Missionaries Lives On, “Being chosen for this internationally focused award indicates the reputation and acclaim that Columban Fr Shay Cullen’s human rights work is attracting internationally.”

PREDA is active in the rescue and care of abused children from jails, sexual predators and brothels. It gives victims a safe home with protection, education, empowerment and healing therapy and restores their self-esteem.

The foundation is also engaged in promoting human rights and justice for the marginalised, as well as selling fair trade produce to support mango-growing farmers.