Cesar was full happiness and hope when he was called to the school stage on the day of his graduation last April 2017. He graduated from elementary along with other Grade 6 pupils of Nagbayan Elementary School, a walking distance from the Preda Bukangliwayway Center for Boys.

A little more than a year ago, the social worker of Iba, Zambales brought Cesar to the PREDA home. He had bruises he got from beatings by his own father and grandfather even for the slightest misdemeanour at home. Because of this, he stayed most of the time on the streets, dropped out of school and got hooked to online games to the point that he would steal cash from his grandfather just so he can spend hours playing on the Internet. Then, the beatings became worst until a concerned neighbour reported to the local social worker what was happening to him.

Cesar’s parents separated when he was only a toddler. He grew up with his father who, not long after the separation, found another partner and had two children with her. Cesar felt dejected by his own family. 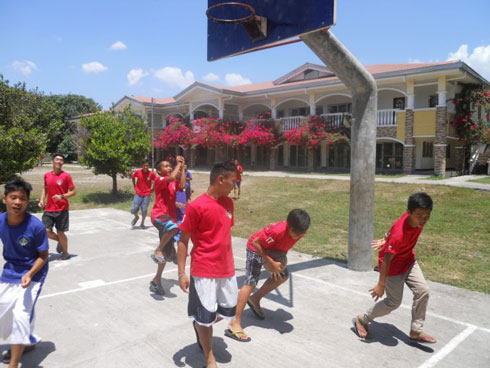 At the PREDA home, Cesar was initially aloof but he slowly learned to trust the staff and some of his fellow residents and became friends with them. He participated in most of the activities but the non-formal education (NFE) sessions were his favourite. Before the school year started last year, the staff thought that he would do well in formal school so they enrolled him at Nagbayan Elementary School.

In the school, the teachers said they did not have any problem with Cesar. In fact, he’s always behaved inside the classroom and attentive to the teachers.

The PREDA social worker invited Cesar’s father to come to the Preda home to attend the family therapy sessions. During the first session, the father was full of negative words towards Cesar. He had nothing good to say about his own child. Then, through a series of sessions, the Preda social worker and psychotherapist made him aware of the possible reasons - his felt dejection and unmet needs - why Cesar was engaging in negative behaviour. He also learned about children’s rights and responsible parenthood. Eventually, he also realized that he had a lot of shortcomings to Cesar and was ready to make amends with his son.

The PREDA social worker allowed Cesar to spend Christmas time with his father in December 2016. By that time, the father was again separated from his live-in partner. When he came back to the Center the following month, Cesar reported that his relationship with his father and grandfather who lives in the same compound was much improved. Yet he cannot go home at that time because the school year was not yet over.

Soon after his graduation, Cesar was reintegrated back to his family. A month later, the PREDA social worker visited him to see how he was doing. The social worker found a happy, more responsible Cesar living with his grandparents while his father was off to Manila for work.

Cesar is now a junior high school student. The PREDA Foundation is supporting his studies by sending him monthly school and transportation allowance.