The Art of Giving

Fijians know what to do in response to any major event that takes place in the life of the community, whether that community be their immediate family, tribal group, parish, or society at large. Such an event may be the birth of a child or the death of someone whom they knew, either a family member or someone within their parish. Other events include welcoming a person of importance or a new member of a parish, ceremonies of farewell, marriages, and the opening of special gatherings, like a bazaar, or the beginning of a parish executive meeting.

The reason why they know what to do is that they know what to give and how to give it. From their ancestors they inherited a set of rituals that underlie the ceremonial giving of three types of gifts, each of which could be given on its own or, depending on the significance of the occasion or the importance of the person being honoured or welcomed, all three could be presented in the same ceremony.

The most important gift is the tabua (whale’s tooth). This is a large ivory tooth that is extracted from the whale. Nowadays it is forbidden by law to take a tabua out of Fiji because it is considered to be an endangered species. The presentation of a tabua can be an impressive ceremony.

Secondly, and more commonly, yaqona is presented. Yaqona is more widely known as kava. It is a shrub who botanical name is piper methysticum. On a very formal occasion, the whole shrub would be presented and later pounded into powder form and then, by means of a cloth, sieved into water to create that liquid some people rudely call “muddy water”. Associated with the yaqona ceremony is the presentation of what is called the wase ni yaqona or the food that has been prepared for a very formal gathering, which is usually a pig that has been cooked in an earthen oven. 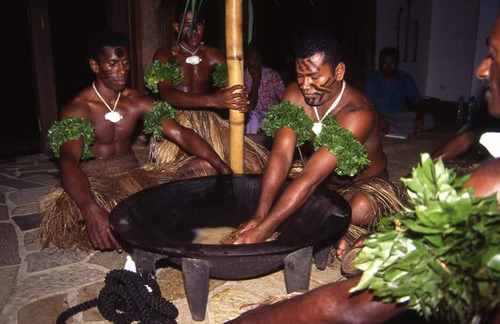 Thirdly, there are the ibe or mats woven with strips of pandanus leaves and the masi or cloths made from the bark of the mulberry tree. During a very formal presentation, it is the women who bring these in first and place them before the seated elders prior to the presentation of the tabua. On the occasion of a funeral, some of these would be used for wrapping around a coffin during the burial ceremony.

Now the words that are spoken in carrying out these ceremonies normally follow a set pattern. There are also people within any Fijian community who, because they belong to a particular tribe or are gifted speakers or have status, are responsible for or called upon to carry out such ceremonies.

While there are variations, the general pattern is as follows. First of all, the speaker or presenter of the gift would acknowledge the land (na vanua) and the people to whom the gift is being presented and also the land (na vanua) and the people who are presenting the gift. Secondly, the speaker would explain the purpose of the gift – for example, to express sorrow or appreciation, to welcome or farewell. Thirdly, as an expression of humility the speaker would say that this is such a small gift – and the people receiving the gift would all shout “levu” or, in other words, “no! it is great”.

The fourth part of the speech would be a request for forbearance on the part of the hosts or those receiving the gift, asking them to forgive anything offensive that may be unwittingly done by those who have come to present their gift. Finally, there would be the concluding reference, once again, to the two lands or peoples that have come together in the presentation of this gift and this would lead to a familiar phrase which would end with the speaker sonorously raising his voice and calling out, “a tu-u-u-u…” And the people to whom the gift is presented respond with a deep guttural expression of appreciation.

Then there are the words of acknowledgement or thanks and the “touching” or reception of the gifts. The speaker on behalf of those receiving the gift will go and physically touch the gift with both hands as a way of expressing their wholehearted acceptance of this gift and these people.

This is followed by the sharing or drinking of kava, emotional encounters between long-lost friends, animated conversations, and on some occasions, when appropriate, singing and dancing. Such occasions last well into the night and even into the following day.

So when it comes to giving or expressing their feelings on any given occasion, the Fijian people have got it down to a fine art.

Columban Fr Tom Rouse was a missionary in Fiji from 1976-2014.  He is now Mission Coordinator of St Columbans, Lower Hutt, New Zealand.