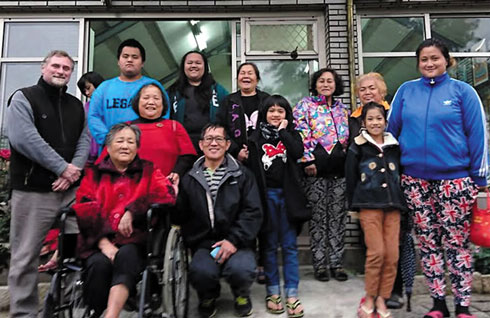 Adai is a grandmother and faithful member of the Catholic community in TianGou village in the mountains of Taiwan. Like all the residents of the mountain villages along the DaAn River, Adai is a member of the Tayal tribal group. The women are famed for their weaving and the men for hunting and war.

The village sits on a flat spur of the mountains at an elevation of 900 meters (2,952 feet) and is made up of about 50 families. The Catholic Church in the village is small by many standards, but Adai regularly attends house prayers every Wednesday evening and Mass on Sunday morning. She was baptized in the church, married in the church, her children and grandchildren were baptized in the church and several years ago her husband was buried from the same church. For many years she also ran a successful restaurant providing meals for local people and lunch boxes for workers on the roads and occasional tourists. Recently, however, her life has not been easy.

Diagnosed with diabetes she gradually lost the sensation in her feet and had her right leg amputated. Heart disease followed, and now she must have kidney dialysis three times a week. She is mostly confined to a wheelchair and is cared for by one of her teenage grandsons. Despite these afflictions, Adai continues to attend house prayers and Sunday Mass. If her grandson cannot bring her, another Catholic member of the village makes sure she can attend. If she hasn't arrived in time for Mass, even the altar servers already in their cassocks have been known to race off to her house to fetch her. The illness of Adai, and the aging of several other members of the congregation, made us confront a significant lack in our church facilities.

The church itself was built by Maryknoll Fr. Dan Dolan and is dedicated to the memory of another Maryknoll priest Fr. Vincent Capodanno. Fr. Capodanno did not work in the village, but was on mission in other parts of Miaoli County for several years. When sent to Hong Kong, he joined the U.S. Marine Corps as a chaplain and died in Vietnam while ministering to wounded Marines under mortar fire. He recently was made a Servant of God, and there is an active campaign for his beatification. 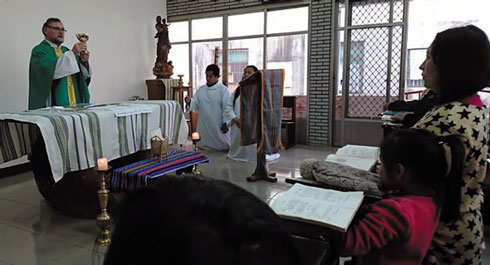 TianGou Chapel is the only church dedicated to the Servant of God in Taiwan and one of only a few worldwide. The church was extensively renovated two years ago (the roof leaked in heavy rain), and the altar to Fr. Capodanno was made more prominent. It is now just inside the main door to greet the faithful as they enter for Mass. The procession for Mass begins and ends at that altar.

The presence of Adai in her wheelchair raised the obvious problem of access. Two concrete steps lead up to the main door and into the church from a terrace which could only be accessed from the street by five, steep, stone steps. Often, her grandson could not get her up the various steps and more hands were called from the church, often the altar servers and myself. A ramp was needed. I got a loan and Vesu, the catechist, bought materials and various villagers helped to create a cement ramp from the sidestreet through the wall surrounding the church property, around to the front and into the church. A new main gate was installed, and we commissioned a roof over the main door to provide shelter from heavy rain. A new metal sign was put up facing the street. It all cost $1,000 and greatly adds to the beauty of the church. However, the village Catholics struggle to repay the loan. I am sure they would be very grateful for any assistance.

Adai is grateful that she can now more easily get to church, as are the two other elderly ladies who make their way to Mass on Sunday with the use of their walkers. It also means that they can get to the bathrooms behind the church and to the kitchen where women of the village, on a roster, on Sunday after Mass cook lunch for older parishioners and a Columban missionary.

I have known Adai since I came to the parish, and her faithfulness in the face of affliction continues to inspire. She has responded wholeheartedly to everything God has asked of her. In this, she resembles Fr. Capodanno and his sacrifice for others. Could we all not show that same missionary spirit?!