During the presidential campaign, Donald Trump constantly drew attention to the rusted-out factories “scattered like tombstones across the landscape of our nation.” His criticism of the offshoring of jobs helped him become the first Republican presidential candidate since 1988 to win the Great Lakes State of Michigan. According to him, these jobs had migrated to China, India and Mexico and his promise to bring them back won the presidency for him.

As we have seen in this series of articles on the impact on jobs of artificial  intelligence, ‘big’ data and robots is much more complex. In Trump’s narrative, manufacturing is dying in the United States and factories need to be revived. The truth is that U. S. Factories are still producing a lot of goods. In fact, in 2016, manufacturing hit a record high in the country with more goods than ever being produced. But, of course, a significant percentage of these goods were produced using robots and other forms of machine learning. In 2016, with only two-thirds of the number of workers, United States factories produced 85 percent more goods than they did in 1987. So there is little substance in President Donald Trump’s rhetoric that he will bring back a significant amount of jobs. Even if he succeeds in bringing back jobs in the car manufacturing sector, these cars will be built by robots. 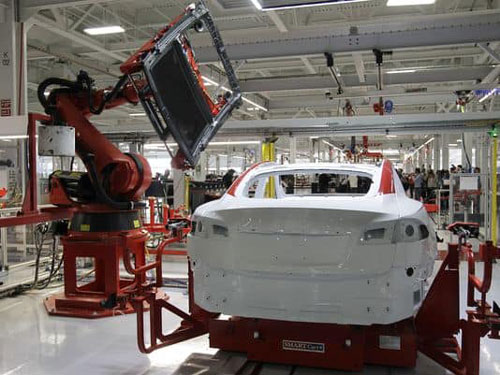 There is another unpalatable twist in this story, given the patriotic rhetoric of President Trump’s inaugural address, calling on Americans to buy US goods and employ U.S. citizens. The majority of robots in use in U.S. factories are made in China. The reason for this is that during the past number of years the Chinese government have spent billions of dollars building up the robot industry in China. According to the International Federation of Robotics, om 2013, China became the world’s largest market of industrial robots. China has set its sights on becoming a global producer for robots for manufacturing, for agriculture and for a range of other applications during this decade.

Henrik Christensen, director of The Contextual Robotics Institute at the University of California, San Diego says that. “If you look at the comparisons in investment between China and the U.S., we’re going to lose, The investments in China are billions and billions. I’m not seeing that investment in the U.S. And without that investment, we are going to lose. No doubt.”  Frank Tobe, the publisher and editor of a trade magazine called The Robot Report, called on the U.S. government to invest in robotics. “We better do something, or we’re going to be behind .....we should be in the robot business, not just users of foreign robots.”  If the U.S. does not invest in robotics there will be little hope of a manufacturing resurgence. Today, the U.S. buys a lot of goods which are made in China. Tomorrow it will be buying U.S. goods made by Chinese robots.

Many people might be surprised that China has invested so much money in robotics, since their comparative advantage since the 1980s has been their huge population who were willing to work for wages which were a fraction of those paid to European or U.S. workers. However, during the past decade, China’s population has been getting older, and because of the one-child families, the amount of workers coming into the workforce has been reduced. Furthermore, worker’s wages have been growing faster than the nation’s economic growth and as a result, the Chinese government are fearful that industries will move to other Asian destinations such as India, Vietnam or Indonesia.

In order to address this worry, the government began to invest in automation. Local governments have offered billions in subsidies to companies which are willing to build and use robots.  At the central government level, President Xi Jinping called for a robot revolution in 2014. There have been hiccups along the way but steady gains are gradually made in improving their robots. In five to ten years China will be producing robots comparable to those being produced today in Germany  and Japan.

Much of the robotic technology was invented in the U.S. but other countries, such as China, have taken it over and made it cheaper.  The U.S. now buys robots from China. What the U.S. can learn from the Chinese example is that the government must play a nurturing and fostering role in developing the robotics industry in the United States.

Columban Fr Sean McDonagh, a missionary in the Philippines for many years, has worked tirelessly to improve the care of the earth, and has published numerous books. He was an advisor to Pope Francis on preparing his encyclical, Laudato Si’.