Australian nun to be deported from Philippines for alleged political activism

An Australian Catholic nun who has been working as a missionary in the Philippines for nearly 30 years has been ordered to leave the country on the grounds of allegedly joining protest rallies.

Sr Patricia Fox, 71, will be deported within 30 days, after the immigration bureau revoked her missionary visa. Her deportation order stated that she was “found to have engaged in activities that are not allowed under the terms and conditions of her visa,” according to Reuters.

“She has not participated in any partisan activity. She is a nun,” said Jobert Pahilga, one of Fox’s lawyers, in a report from Reuters.

“We will file a motion for reconsideration on this order,” Pahilga continued.

While her missionary visa was cancelled, Sr Fox will still be able to enter the Philippines as a tourist, but not as a missionary.

Sr Fox’s deportation comes only a week after she was arrested at her convent and detained for 22 hours by authorities. She was later released after “no probable cause” was found for her arrest. 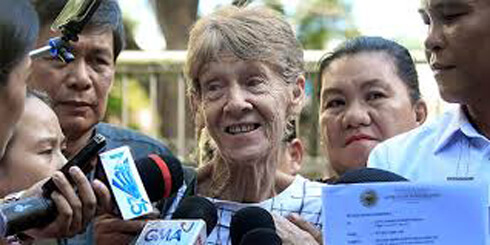 Sr Fox has been a legally documented alien in the country with a missionary visa, who has served as the Philippine superior of the Sisters of Our Lady of Sion. Her primary focus has been working with the rural poor for the past 27 years.

Allegations brought against Sr Fox have included participating in political rallies, which according to Philippines immigration law, would violate her right to stay in the country. However, Pahilga has denied these claims, saying she “has done nothing wrong or illegal,” that would warrant her deportation.

“I would call it religious because we are called to stand beside the poor,” Sr Fox said, according to CBCP news, the Catholic Bishops Conference of the Philippines’ news outlet.

“I haven’t joined partisan political rallies but I have been active in human rights issues,” she continued.

CBCP also reported that they were told Sr Fox was primarily arrested for being an “undesirable alien” within the country because she participated in the farmer rally protests.

President Rodrigo Duterte of the Philippines originally ordered an investigation into Fox for “disorderly conduct” and brought claims against her for involvement in political activity reaching beyond the scope of her missionary work.

“It’s a violation of sovereignty,” Duterte recently said, noting that Sr Fox does “not have that right to criticize us. Do not insult my country.”

Duterte’s administration has recently barred several human rights activists from re-entering the Philippines in a campaign to limit foreigners in the nation. The president has also made headlines with his crusade against drugs within the nation, which has caused international controversy and left thousands of apparent users and dealers dead.

“The Duterte regime is paranoid and afraid of an elderly nun working for human rights and social justice for the poor,” said Renato Reyes, a leader of the group, according to Reuters.

Auxiliary Bishop Broderick Pabillo of Manila also recently said that the actions brought against Sr Fox were a “form of persecution and harassment.”

“This is political,” Pabillo said. “The government is trying to intimidate individuals and groups who are in pursuit of social justice for the oppressed and the poor.”

Sr Fox has 30 days to leave the Philippines upon receipt of the immigration order.