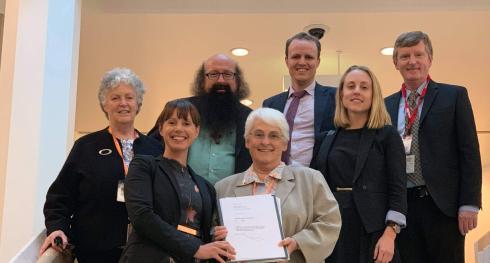 The Columban Peace, Ecology & Justice Coordinator for Australia, Fr Peter O'Neill SSC [1st on Right] with members of ACRATH, the Human Trafficking team from the Department of Home Affairs and other NGOs. Photo: ACRATH

Australia has moved a step closer to having a Modern Slavery ACT. After a period of debate, the Modern Slavery Bill was passed in the Senate yesterday.

In a statement on its website last night, Australian Catholic Religious Against Human Trafficking (ACRATH) commended the passage of the bill in the Senate."ACRATH congratulates all who have had a part in bringing the bill to this stage," the statement said.

It is hoped the Bill will pass the House of Representative before Parliament rises for the Christmas break. Once enacted into law businesses operating in Australia with an income threshold more than $100 million will be required to report annually on risks of slavery in their supply chain and actions they are taking to reduce the risks. There has been some criticism of the bill for the absence of penalties for non-compliance and an independent anti-slavery commissioner.